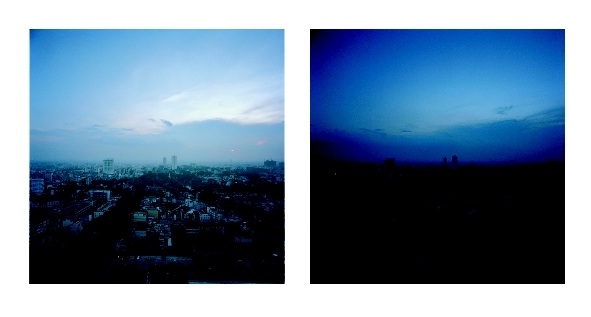 The works of The Seventh Wave are pairs of
photographs each with precisely the same cropping
and angle of view… The camera is on a tripod. I
first take one photograph, and after a while
another. I have wanted to vary the interval,
keeping it “unscientific” and even indefinite.
Anything between two seconds and six hours can
pass between the moments when the pictures were taken.

In some of the pairs, the difference can be seen
easily, while in others it is less obvious. Even
in the blink of an eye, many atoms will revolve,
a grasshopper can leap, and a glimmer of light can change place.”

This was how Marko Vuokola (born 1967) described
the works of The Seventh Wave in 2007. By that
time, the subjects of the images had ranged from
Finnish sea and lake scenes to the grounds of
Versailles, the earth and skies of Texas, and an
Audi dealership in Helsinki’s Herttoniemi suburb.
Since then, the series has been expanded with
images of paradise islands in Vietnam, an urban
landscape and the window of a Finnish apartment building.

A characteristic feature of Marko Vuokola’s work
is that he takes large numbers of pictures, which
he then sorts, selects and rejects until only one
pair, almost perfect, remains of each “theme”.

Marko Vuokola’s art is at once grand – addressing
the major basic issues of life – and restrained.
It is demanding and enduring, similar only to itself.

Since 1989, Marko Vuokola’s work has been in
dozens of exhibitions in Finland, Scandinavia,
other European countries, and in the United
States, Australia and Asia. He held his first
solo exhibition at Galerie Anhava in 1992.