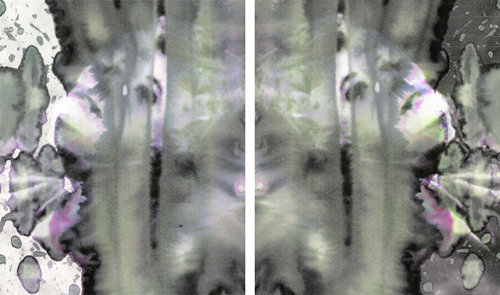 The transfer function reveals how the circuit modifies the input amplitude in creating the output amplitude.

Transfer Function features four artists merging and manipulating – physically and visually – their mediums including photography, painting, printmaking, textiles, ceramics, and sculpture – creating their own unique hybrids. The results are often imbued with further juxtapositions such as the personal with the abstract and the mass produced material or image with the handmade.

Jessica Jackson Hutchins’s ceramics, photographs, prints, found objects and sculptures are inextricably linked to each other and defy their limits. For example, the woodblock that begot a series of monoprints was also a major sculpture in her recent solo exhibition at Derek Eller Gallery, New York, after having served many years as her family table. Her off-kilter, bulbous ceramics often occupy household furniture, thereby transforming the two into a new sculptural being. The artist was recently lauded in press including The New York Times and New York Magazine for her contribution to the 2010 Whitney Biennial.

Sam Moyer’s sculptures carry conceptual heft balanced by their history as commonplace materials transformed by both art and crafting processes. Incorporating photography and painting into her sculptural practice, the artist creates objects that somehow seem both handmade and prefab. Her work was seen in 2009 group shows at the St. Louis Contemporary Museum and P.S.1 Contemporary and will be in P.S.1’s 2010 Greater New York. Her recent solo exhibition at Rachel Uffner Gallery was noted by The New Yorker and Time Out New York.

Sara Greenberger Rafferty works with found imagery, printing portraits in CMYK ink on a desktop printer. She then manually reworks the prints by digital manipulation before finally reproducing them as exposed photographs. The visceral results merge the aesthetics of photography, collage, watercolor, and even body art and embody a wide emotional range from humor and melancholy to disgust. She has presented solo projects in New York at Rachel Uffner Gallery, The Kitchen, and P.S.1 Contemporary.

Mariah Roberston’s unique photographs are the result of darkroom experimentation and celebrate the element of chance. The resulting images are a vigorous mix of representation and abstraction. “The outcome doesn’t matter as much as the inquiry; this isn’t abstraction it’s exploration,” (Mariah Robertson, 2009). Her work has been seen in New York at a recent group show at Sikkema Jenkins as well as solo shows at Museum 52 and Guild & Greyshkul. Her work is in the collections of the Museum of Modern Art and the Los Angeles County Museum of Art.