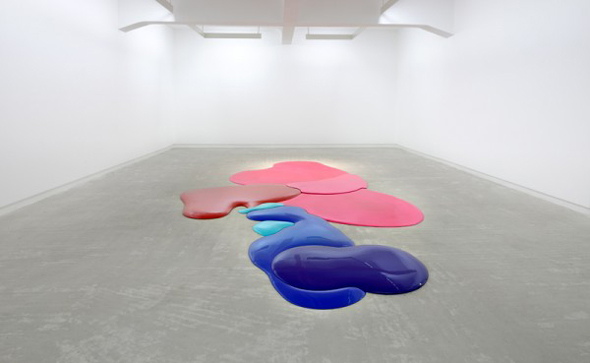 PETER ZIMMERMANN For his first solo exhibition in Berlin, Peter Zimmermann utilizes two rooms of the Michael Janssen Gallery. In the first room, visitors come across two of his new sculptures. The current exhibition shows this special body of work to a wider audience for the first time. Zimmermann has been using epoxy resin for his pictures for two decades already, but it is only in recent years that he has also used the material to create three-dimensional works. With their intense colors, they unmistakably set themselves apart from the grey floor and white walls. At the same time, they take on an organic form, resembling oversized drops of a fluid that has been spilled accidentally. Yet a closer look reveals the complex structure of the sculptures. Their shiny, running surfaces give the impression of soft, upholstered objects. Sometimes it’s even difficult to resist the temptation to prod them with a foot or poke at them with a finger. This is due to the material that they are made of. In its unprocessed state, epoxy resin is colorless and liquid. Zimmermann blends the liquid with pigments, using it to form layers. When the resin dries, it creates hard, stable, heavy formations. A similar effect can be observed with the pictures in the second room. The same method of production is used to create large format canvases. As his starting point, Zimmermann uses digitized motifs taken from sections of earlier works or found on the internet, television or other sources. He manipulates them using Photoshop, combining details from different motifs in order to make a one-to-one template, which allows him to transfer the contours of the various patterns onto the canvas. With the additional use of stencils, the colored epoxy resin is then poured onto the surface. This happens layer by layer, with lighter colors being applied first. One special characteristic of the material is that, despite the use of a clear template, the final results vary. There is always an inevitable element of fortuity contributing to the process. The various layers of epoxy interact with each other in order to create the nuances that are ultimately appreciated in the finished work. The resulting smooth and transparent surfaces take on a captivating luminescence, which magically attracts the beholder. On one hand, the pieces embody a lightness that suggests dried soap bubbles. On the other hand, the substance is applied across the entire surface of the painting, yet each layer of color contributes relief-like elevations, giving the pictures a sculptural presence and a spacial impact. It almost seems as if the color wants to venture beyond the borders of the canvas, as if it had been difficult to restrain. The gleaming, irregular surfaces reflect the surrounding area, distorting it. When standing in the exhibition room, with the walls almost seamlessly absorbing the large format works, the viewer is confronted with an opulence that is almost overwhelming. Peter Zimmermann’s painting defies all attempts at categorization, although the influence of action painting and its main exponent Jackson Pollock is clearly apparent. Peter Zimmermann (born 1956 in Freiburg) lives and works in Cologne. He studied at the Academy of Art and Design in Stuttgart. From 2002 to 2007, he was a professor at the Academy of Media Arts in Cologne. His solo exhibitions have featured at important European and American institutions: “Wheels” at the Nuremberg Kunsthalle in 2007, “Current: Peter Zimmermann” at the Museum of Art in Columbus OH in 2008, and recently, the significant retrospective “All You Need” at the Museum of Modern Art Kärtnen in Klagenfurt, for which an extensive catalogue has been published. Galerie Michael Janssen