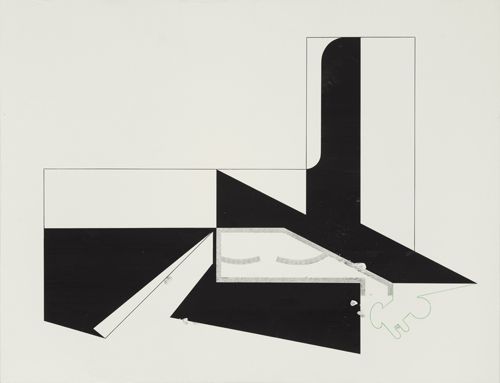 For the show The Influential Monkey Hultenberg has chosen a somewhat alternative way, to put his formally stringent paintings into perspective. This has been done with the aid of an angry little monkey he drew last September, which during the working process has been acting as an embodiment of the ’spirit’ of the exhibited paintings. Hereby Hultenberg reveals aspects of the artistic process rarely displayed in exhibitions. Mainly intended as a private note to the artist, the drawing is not physically a part of the exhibition. However, the title of the show and a short text written by the artist, ensure that the monkey is at the forefront of audience’s consciousnes s, ultimately influencing the interpretation of the abstract works.

Although an extension of concrete painting, the works refuse to settle within this category. The visual language is objective and rational, but the clarity characteristic of the form is not present within the content. Silence and intentional confusion prevail. Hultenberg is specifically interested in situations, which, arises when the most irrational ideas are realized decisively. By allowing these types of ideas an unreasonably large expressive emphasis, Hultenberg wants to make evident the staggering number of options the white surface of a canvas reflects.

2 thoughts on “The Influential Monkey”