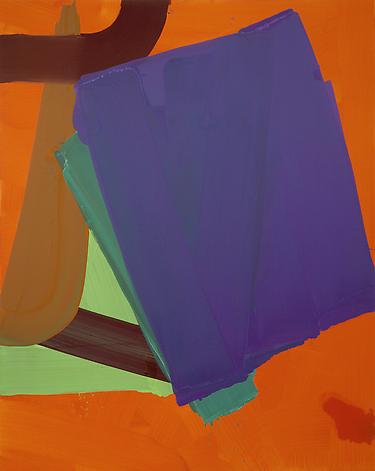 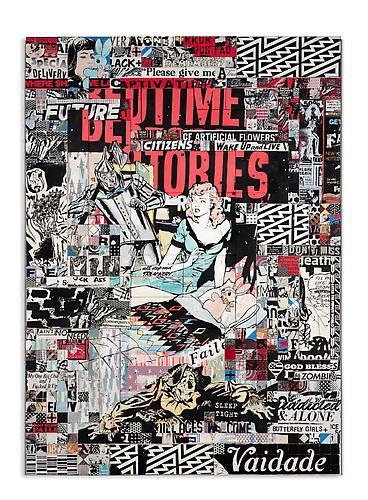 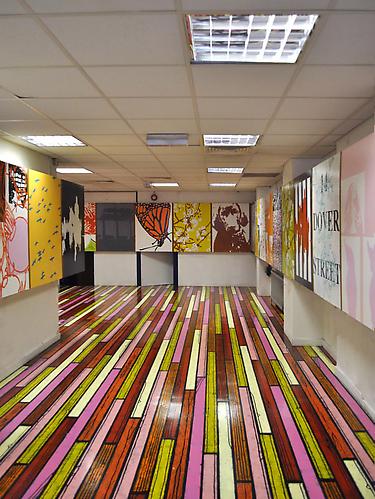 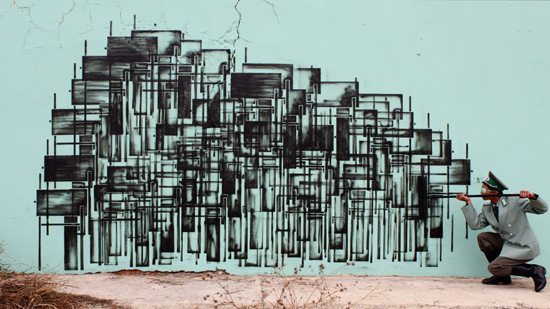 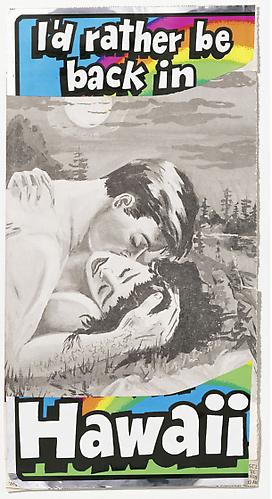 Perry Rubenstein Gallery announces SHRED, an exhibition curated by Carlo McCormick, an independent curator and senior editor of Paper magazine, which will feature collage-based works from a diverse group of artists, some who have pioneered collage as fine art and others who are expanding upon the subversive flavor inherent to the medium. Featured are works in myriad media—from simple layered assemblages of newsprint on paper to lively video animations made from cutout paper silhouettes.

The exhibition will include works by Bruce Conner, a prominent member of the Beat community; California-native, Jess, whose oeuvre includes collages based on alchemy, religion and comic strips; downtown darling Dash Snow; Gee Vaucher, who is central to punk visual culture; and Jack Walls, whose self-portraits incorporate photographic imagery taken by his long-time partner Robert Mapplethorpe.

Provocative new works that were specifically created for the exhibition will be included by artists such as: the collective FAILE (represented by Perry Rubenstein) who will show a ripped painting featuring brand new iconography; Shepard Fairey; Leo Fitzpatrick; Mark Flood; Erik Foss; Swoon; and, Judith Supine. Also to be shown are a finely cut paper collage by Brian Douglas (Elbow-Toe) that resembles intricate painting, while Shelter Serra will present three-dimensional work—red roses cast in white silicone. Video works by Martha Colburn, Tessa Hughes-Freeland and Bec Stupac will be featured, with Stupac premiering a new piece.

SHRED is curated by Carlo McCormick, a prominent New York City-based author, curator, critic and champion of the downtown art scene. McCormick has authored numerous books, monographs and catalogues on contemporary art and culture, including The Downtown Book: The New York Art Scene 1974-1984 published by Princeton University Press which he coauthored. He has lectured and taught extensively at universities and colleges around the United States. His writing has appeared in Aperture, Art in America, Art News, Artforum, Camera Austria, High Times, Paper, Spin, Tokion, Vice and countless other magazines. He has curated exhibitions for the Bronx Museum of Art, New York University, the Queens Museum of Art, and the Woodstock Center for Photography. 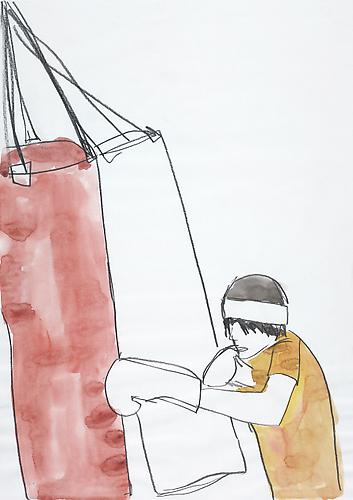 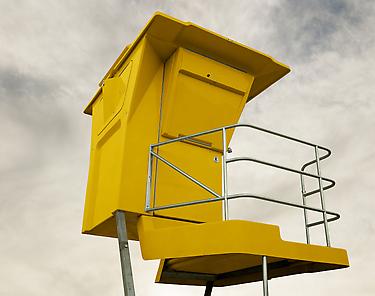 Perry Rubenstein Gallery is pleased to announce Amir Zaki, Relics, a new body of photographic “portraits” of elevated lifeguard towers taken along different beaches in Southern California. The exhibition represents a continuation in the artist’s ongoing interest in architectural structures, but marks a distinct shift in terms of location—from urban Los Angeles to the beaches south of the city. Amir Zaki Relics will be on view from May 6 through June 15, 2010.

With the new series, the artist’s intention is to create photographs that transform seemingly banal lifeguard towers that dot the Pacific beaches of Orange County into something other. They appear as awkward monumental public sculptures or stylized and non-functioning relics. The images of the lifeguard towers function less as a typology, but rather anthropomorphized as a group of portraits, not only because they resemble heads resting on necks, but also because the individual character of each tower is emphasized in a very specific way. Each of the images of the lifeguard towers are photographed against a sky, shot from below, and never include any trace of sand or ocean. Because they are isolated from any reference to locale, they sometimes appear to be other than what they actually are.

Zaki has digitally altered the images in a variety of ways ranging from simple color changes to gravity defying, physically improbable structural modifications. He has digitally removed any visible access routes such as ladders or ramps leading to the tower platforms. This appears as a subtle subtraction, but renders the towers essentially dysfunctional. The artist has pared down the visual information in this work to two fundamental elements, which are the tower and the sky (subject and background). Many of the towers have been paired with skies photographed on a different day, with rather incongruous lighting.

Also to be included in the exhibition are a group of images depicting the iconic ‘beach mobile’, the Volkswagen Vanagon. The Vanagon images have manifested in a photographic diptych and a triad of abstract mandala-like patterns. The Vanagon is essentially a slightly glorified box, an elongated cube designed to be able to fit the maximum amount of fun-based cargo, with little regard for luxury. It represents summer day trips, leisure, camping, surfing, and a bygone era of automobile design that emphasized form following a maximum use of space, as opposed to concerns with ergonomics, aerodynamics, or electronic gear. In that sense, like the transformed lifeguard tower, it is a relic.

The photographic diptych of the Vanagon is presented as a Yin-Yang duality between sunrise and sunset, moonrise and moonset. How one decides which is which depends on whether one believes the images depict a ‘west’ coast or ‘east’ coast. The Vanagons face each other, as polar opposites (solar/lunar/dawn/dusk) but simultaneously equivalent and interchangeable. This duality is directly based upon the color scheme of two Volkswagen Vanagon models from 1982. One is a cool, two-tone blue/light-blue (representing dawn) with a full moon and daybreak-pink- purple sky above, and the other a warm, two-tone orange/cream (representing dusk) with a full sun and yellow-orange sunset sky above.

Despite all of these apparent polar opposites or dualities, in actuality Zaki made the two original photographic exposures just a few minutes apart during one mid- morning under an overcast sky, using only one Vanagon. The ‘other’ Vanagon was created digitally by altering the color palette of the auto paint. The dramatic cliché skies were completely concocted using multiple photographs of skies, moons and suns. Now as a pair, the Vanagons are idealized, nearly all of the hardware and blemishes digitally erased.

Both the images of lifeguard towers and of Vanagons share a fascination with the familiar made unfamiliar, by creating abnormal looking structures/objects as portraits. 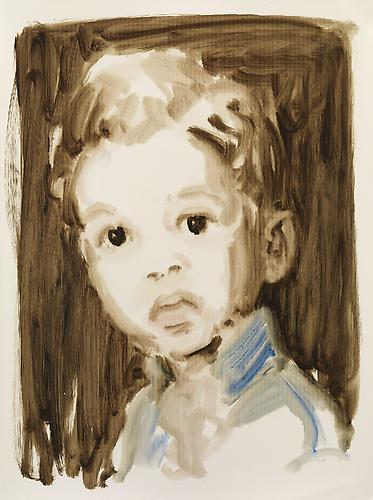 Perry Rubenstein Gallery is pleased to announce an exhibition of new paintings by Annie Kevans at 527 West 23rd Street. The exhibition will be comprised of some 30 new works, all painted within the past year.

The title of the exhibition is Manumission, a term with a complex history. Manumission refers specifically to a slave owner’s ability or discretion to free a slave. That power, in the hands of the men that wielded it, is the same power exercised by the philanderer in the choosing and the dismissal of his mistress.

The paintings in this exhibition are all portraits; most depict the illegitimate children of various Presidents of the United States, others their mistresses. Many of these figures, such as Sally Hemings and Grace Kelly, are well known. Others are considerably less so, and even less so are their children. Through this series of portraits, Kevans explores the representation of power, the lack thereof, and its manipulation in the hands of those who posses it. Having an affinity for the marginalized, Kevans paints figures overlooked, exploited, or objectified within the context of history or contemporary culture, imbuing her subjects with a tangible humanity and sensuality.

Kevans’ wide-eyed rendition of William Beverly Hemings conveys an innocence that arrests its viewer, yet exposes dark themes that belie its surface. William, the son of Sally Hemings, is believed to have been fathered by Thomas Jefferson. With William’s startled and seemingly innocuous gaze, Kevans alludes to the injustice and hypocrisy perpetrated by one of the most revered figures in American History.

Kevans looks to historical texts, illustrations, or photographs for source material, when possible. Yet as is often the case with figures that have been all but forgotten or perhaps deliberately omitted from history, she visualizes characters by borrowing features from life models. In effect, lending a face to the faceless and casting light on issues that are uncomfortable and thus ignored.

Implementing loose brushwork and layers of translucent oil paint, Kevans paints her subjects in a manner so elegant and subtle that she allows the character of both the medium and the subject to speak for themselves. Given their rich individual histories, the manifestations of these characters are as incredible as the feat of their rendering.

The exhibition of Annie Kevans’ paintings opens one day before the celebration of Presidents’ Day Weekend, February 11th, 2010.

British artist Annie Kevans was born in Cannes, France, and lives and works in London. Past solo exhibitions include Vamps and Innocents, Galleria Antonio Ferrara, Vienna (2007); Swans, 319 Portobello Road, London (2007); and Girls, Studio 1.1, London. Kevans’ work has been included in numerous group exhibitions, notably at the Galerie Karin Sachs, Munich (2008, 2007); Galleria Antonio Ferrara, Italy (2007, 2006); Contemporary Art Projects, London (2007) and will be included in the much-anticipated Power of Paper at Saatchi Gallery, London (Dates TBA). Kevans was a finalist for both the Jerwood Drawing Prize (2006) and Women Of The Future award (2007) in the United Kingdom. 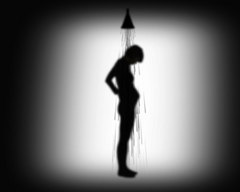