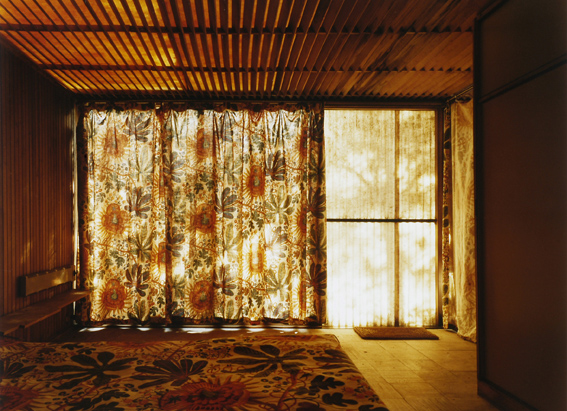 In this project Olsson has delved into the legacy of Bruno Mathsson, one of Sweden’s most important Modernist designers and architects.

Frösakull is a house Mathsson both designed and lived in. Olsson has interacted with the remains of the house, and like Mathsson he has experimented with the house and its possibilities. The result is a collection of images which show us an interpretation of an architectonic legacy. Olsson has arranged and transformed the rooms into a stage, often using light, emptiness and shadow as the only props.

The Södrakull residence, which had been closed off since Mathsson passed away, is approached in a different way: as a voyeur. The interiors are photographed from the outside and through half-drawn curtains. Olsson is here a surreptitious observer rather than participator and the images reflect an outsider’s fettered view of a private domain.

In this body of work Olsson has created an interplay between presence and absence, inner meaning and representation. The images are marked both by intimacy and distance. Together they form a sort of portrait, as well as a chronicle of architecture, remembrance and aging. For this reason the photographs cannot be considered documentary but instead a very subjective depiction of Mathsson’s public and private legacy.

This project includes an impressive monograph, published by Steidl Verlag, to be released this year. The book includes texts by Beatriz Colomina, Hans Irrek and Helena Mattsson. Designed by Acne Art Department and Mikael Olsson.

Mikael Olsson was born in Lerum, Sweden, 1969. He studied at Högskolan för Fotografi at Göteborgs University, 1993-96, Brooks Institute of Photography, Santa Barbara, CA, USA, 1995 and History and Theory in the Department for Architecture, Chalmers Tekniska Högskola i Göteborg, 2001-02. The premier of the film “Kosta 3:30”, a work also concerning one of Mathsson’s residences made by Mikael Olsson, Andreas Roth and Carsten Nicolai, was held at Moderna Museet in 2006. The exhibition Södrakull Frösakull  showed at the Hasselblad Center in Göteborg 2009. This is Mikael Olsson’s second exhibition at Galerie Nordenhake.