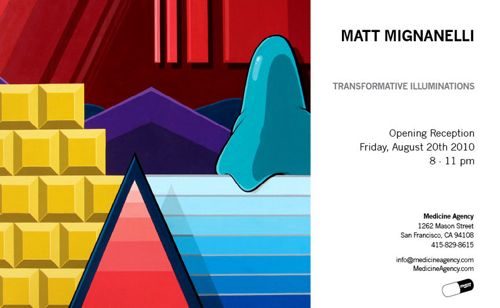 Matt Mignanelli was born in 1983 in Providence, RI. He received his BFA from
Rhode Island School of Design. Mignanelli’s work has been exhibited and
collected extensively throughout the United States and Europe.  In 2010 he
lectured at Parsons School of Design in New York City and at the Art Director’s
Club of Tulsa, Oklahoma. His work has been profiled in Beautiful/Decay,
Juxtapoz, HypeBeast.com, FecalFace.com and Gudberg Magazine (Germany).
His work has also appeared in GQ (U.K.), Dazed & Confused, and Transworld
Skateboarding.

Transformative Illuminations features Mignanelli’s trademark juxtaposition of
organic and geometric forms painted in complex vibrant hues. The seriousness of
this exploration has been further developed, focusing on the interaction of light
within the spaces. His inspiration is drawn from energy, pattern, light, and
emotion. Some of the shapes are discernable objects while others are a
composition of structural elements and organic forms, altering the viewer’s
perception of dimensional space.