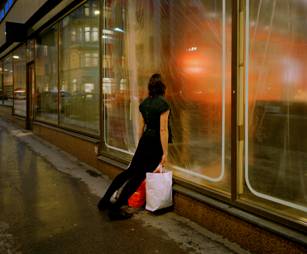 is a group exhibition exploring the current global economic crisis.  This show was initially inspired by Carrie Schneider’s most recent photos “Recession” and “Miss America.”  Acting once again as her own subject, Schneider set out to explore elements of physical comedy and its greater psychological repercussions. But as an American working in a foreign land (Helsinki), during a global meltdown, not-to-mention being bombarded with headlines about Miss California Carrie Prejean, Schneider could not help feeling personally responsible and embraced the topical nature of work. Taking this cue, Sign of Times hopes to convey the multiplicity of thought in regards to our current situation:  from solidarity to parody, from economic to environmental, and of course from the political – both left and right.