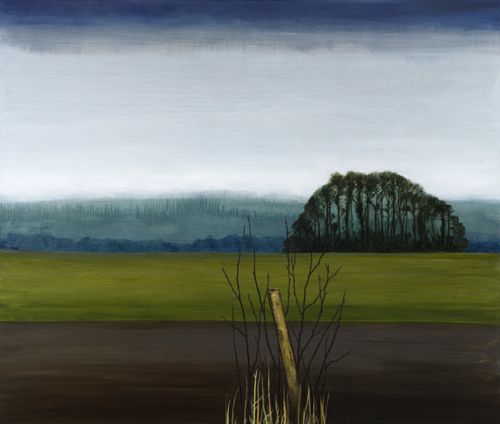 The Utopian notion of the Good Life in the countryside is challenged, even shattered in Søren Martinsen’s interior and landscape paintings, which can be seen at the Martin Asbæk Gallery until 16th October 2010. As a new feature the works in the large format have been painted on raw linen with a mixture of thin layers of acrylic paint and subsequent thicker layers in oils.

The exhibition title Field Studies refers to the artist’s scientific approach to and in-depth investigation of the man-made domestic landscapes and the natural, classic Danish landscapes that the artist frequents on a daily basis around Glumsø. The panoramic landscape depictions have been recreated with the aid of photographic registrations and clear memories. But the direct references in the works to actual places and the succession of the seasons entails an anything but naturalistic look – rather a timeless and unreal impression. The works take on the character of psychedelic landscape paintings which at one and the same time affect, transform and enrich the viewer’s perception of the reality of normally idyllic landscape subjects. Even the titles of the works, such as Fluoxetine 60 mg, distort one’s ideas of the romantic life in the countryside and emphasize the psychedelic idiom of the works.

The works present a glimpse of an external reality that is cropped and manipulated by the artist. The process of creation is thus ascribed to an almost symbolic mechanism which entails that the landscape subjects, with their differences in both composition and choice of colours, can be read as a portrait of the artist Søren Martinsen or as a product of the artist’s mind.

Søren Martinsen (b. 1966) studied at the Royal Danish Academy of Fine Arts in 1995 and has a master’s degree in Fine Art from Goldsmiths, University of London from 1994. Martinsen is also currently exhibiting at Overgaden Institute of Contemporary Art with Children of the New Age, where the viewer is taken, in the documentary video work of the same name, on a journey into a religious universe far from our rational everyday life.