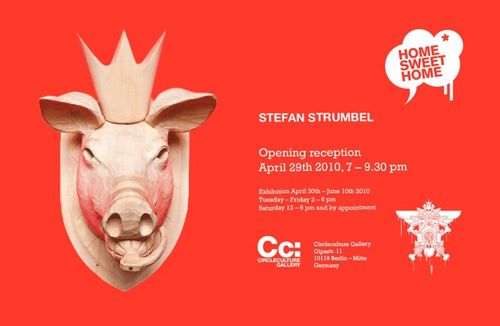 Circleculture Gallery presents Stefan Strumbel’s solo show “Home Sweet Home“. With his art, Strumbel uses traditional motives that are associated with his origin, the Black Forest. On an abstract level, Strumbel deals with the paradigms of “home“ and simultaneously questions its concept. The exhibition encompasses objects from folk art that refer to the clichéd notions of home, folklore and popular piety: the traditional cuckoo clock, wooden masks of the Alemannic Carnival or typical crucifixes mainly used in catholic households.
Strumbel exaggerates these objects of popular cult and culture with elements of urban art and pop art. By doing so, he puts these objects into a new, partly provocative context. Significant elements of the cuckoo clock, such as traditionally carved ornaments, are replaced by aggressive motives that stand for violence, pornography and death. A typical carnival mask from the Black Forest region, such as the “pig mask“, bears a wooden grenade instead of the apple that would be usually expected by the audience. At first sight, these objects do not appear disturbing. The wooden carvings are excellently crafted and, with their bright and colorful surface, appear as light and shiny pieces of pop art. Strumbel, however, creates both an artificial and artistic aesthetics with his usage of extreme exaggerations in regard to form and content. His objects simultaneously provoke and attract the audience by decadence and violations of taboos.
With his art, Strumbel initiates a change in social values: Traditional ideals, clichéd notions of home and the reality of the individual are dissolved and transformed into an aesthetics that becomes an allegory of social status symbols. The artist unmasks the mechanisms of a society that is urged to the pursuit of consumerism by having surrendered to the attraction of the media. With his objects, Strumbel creates a world of illusion that reflects society’s real maladies.

One thought on “Stefan Strumbel”