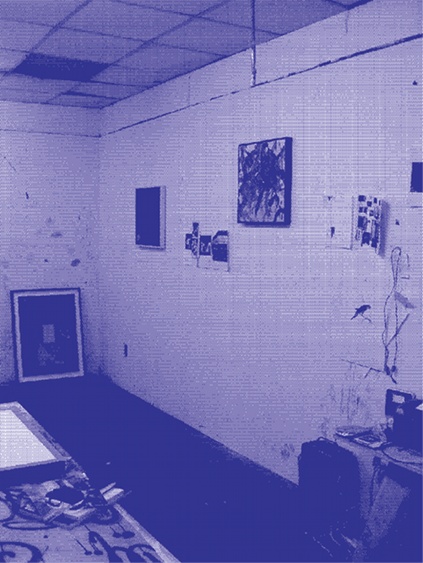 Kavi Gupta Gallery Berlin is proud to present the European debut exhibition of Los Angeles based artist Sayre Gomez.  Included in the exhibition is the artist’s new video Fog (2010), five small abstract paintings, three graphite drawings executed on blue Pantone paper, and a stereo covered in blue flocking playing raw recordings made outside the artist’s studio. This exhibition continues Gomez’s investigations into the ways in which meanings are contextualized and disseminated.  Using the notion of self-expression as an extremely populous example of this, viewers are presented with a disparate series of objects that embrace ideological contradictions and play with one’s assumptions. The works included in the exhibition employ the use of a single color to foreground this dialogue, and to present the art object as a self-evident object, one that endures as it is balances between the unadulterated description of an artist’s interiority and the often tedious explanatory landscapes of the external world.

Sayre Gomez (b. Chicago, 1982) holds a BFA from The School of the Art Institute of Chicago (2005) and a MFA from the California Institute of the Arts (2008).  He will be included in the upcoming exhibition California Dreamin’ curated by Fred Hoffman as part of Arte Portugal 2010 in Lisbon, Portugal. Recent solo exhibitions include Self Expression at Fourteen 30 Contemporary in Portland, Painting at 2nd Cannons in Los Angeles, and Formal Exercise at Sandroni Rey in Los Angeles.  Recent group exhibitions include Other Peoples Projects at White Columns in New York and Awful Parenthesis curated by Aram Moshayedi at Cirrus in Los Angeles.  He currently lives and works in Los Angeles.