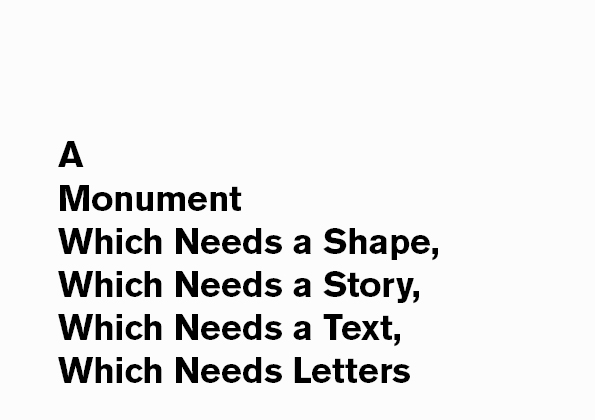 
Johan Berggren Gallery is very pleased to announce a solo exhibition of Malmö based artist Patrik Aarnivaara (b. 1977). For his exhibition, Aarnivaara continues to investigate the concept of an idealized Monument both from its permanent and historical vs. temporal and contemporary aspects and constituents. Throughout the two gallery spaces and in between a red and a blue light, Aarnivaara arranges a sequence of sculptures, images, texts and collages – elements that could be seen as parts of an inquiry into the textual, material, mythical and temporal aspects of such a Monument.

A meandering thought process starts which leaves traces, which ends up in an ideological form, which progresses, which entrenches, which seeks openings in shapes and stories, which moves into a dead-end. A thought of a Monument which needs to move within what forms and materials that is available or remains still. A thought moving through this and that, now and then, yes and no, blue and red, establishing similarity and community through its need for a shape – which needs a story, which needs a text, which needs letters.

In his earlier sculptural installations Aarnivaara has staged narratives or propositions that reflect on the relationship between political ideas, art, architectural theories and geometrical shapes. The sculptures have consisted of assorted objects, texts, models and images – often displayed on table-like, triangular, supporting structures. New to this exhibition is the abstracted and self-supporting quality of each and every element in the exhibition. Every individual work carves out a well-defined space for itself, while still performing on a communal level, further enhancing the collective environment and adding to the spatial complexity.

One thought on “PATRIK AARNIVAARA”