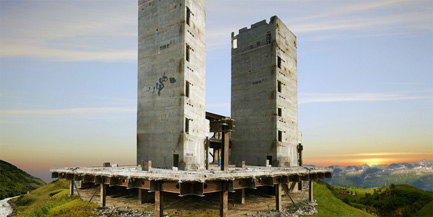 Bordering important political issues and yet unwilling to take sides, Niklas Goldbach´s film „Habitat C3B“ depicts a series of performers unfolding different unexplainable actions in a modernist setting. Lapsing into the totalitarian, these actions re-enact the economic and social realities of our world, forcing us to question how exactly free is our urban and social space and how much room for self-determination we really have.

In her most recent photographic series “Trespassing”, Nathalie Grenzhaeuser argues for a pure presence which derives from her subjective first-person centered views in favour of a moment of identification on behalf of the viewer. A feeling of dignity derives from this naturalized „inclusion“– which is far more formalist and less content-based than we realize at first.

Also taking up structure as the subject matter, Monica Ursina Jäger´s laser cutouts expand a manufacturing technique – that of paper cut-out – into a new technological medium – that of laser cut-out. Humorously called “Amnesia”, these works act as inscriptions which invert the positive (white) and the negative (black) space of an image in a way as to create and hierarchically invert different representational spaces.

Uriel Orlow´s “Remnants of the Future” is an evocative video of a ghostly, nearly deserted Soviet housing project in northern Armenia that was left unfinished after the collapse of the Soviet Union in 1991. In the video, nature and architecture are in constant dialogue, and past, present and future are different layers of the same image.

Combining a drawing and a reversed monitor – giving out signs of life from time to time -, Julia Oschatz´s work “A poorest poet” is the culmination of a continuing evolution as well as the realisation of a very unique pictorial language and universe.

Taking up the no longer-existing „Palais der Republik“ in Berlin as a motive, Sandra Senn photographed its ruins and manipulated them into a new constructed reality. If in one work the rainbow suggests a dream-like quality in other work the remainings of the building have a desolated war-like setting.

In „Paradise is Somewhere Else“ all imaginary and constructed landscapes seem to point to unidentifiable places, in terms of place as well as of time. Either a memory of the past or a vision of a world to come, these images seem to cling to a disturbing documental reality, yet unable to find its anchor in the familiar order of things. The appearance of a black dog in Zhenchen Liu´s film “Under Construction”, threateningly watching us from the top of a waste mountain, summons the feeling of unusualness which pertains the whole show.

One thought on “PARADISE IS SOMEWHERE ELSE”