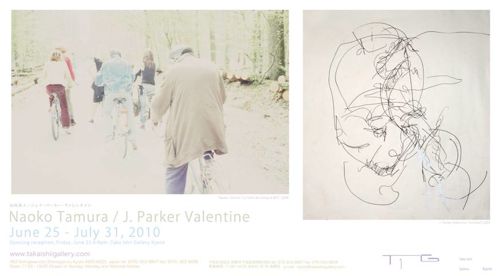 Taka Ishii Gallery is pleased to announce concurrent debut exhibitions in our Kyoto space: Tokushima-born-and-Kyoto-based artist Naoko Tamura and Texas-born-New-York-based artist J. Parker Valentine. Naoko Tamura previously exhibited at both Taka Ishii Gallery (Tokyo, 2004) and gallery.sora. (Tokyo, 2006). In 2009, in collaboration with filmmaker Shinji Aoyama, Tamura presented an installation at VACANT, Tokyo. In addition to gallery exhibitions at Lisa Cooley (New York, 2008/10), and a scheduled exhibition (2010) with Supportico Lopez, Berlin, Valentine’s work has been presented at the Contemporary Art Museum St. Louis (2009).
Naoko Tamura works primarily in the media of photography – though she has tentatively experimented, as well, in the media of film, installation and performance. At first glance, it would appear that her photographic work may be divided into two categories – the atmospheric and cerebrally abstract; atmosphere embodied in the 2004 Seigensha publication Voice and the cerebral in the untitled series of photographs published, serially since 2009, in the psychology journal Psychiatric Mental Health Nursing. Tamura’s commitment to the generally abstract nature of photographic representation results in a literal blur between these apparent categories and to a body of work which, though resistant to unification, is painstakingly consistent. Thus a luridly vibrant blush of blur – in truth an arrangement of flowers photographed at a range beyond close – is no less concrete and, conversely, no less alien than the grounds of an otherwise anonymous space, in fact the psychiatric hospital, Clinique de La Borde. Tamura’s new publication is anticipated for release in Autumn, 2010.
J. Parker Valentine is a post-conceptual draftsperson. While crafting artwork in a variety of media, Parker’s practice amounts to an elemental yet informed engagement with the act of mark-making. Endowed with a literal weight, in part a consequence of her often chosen carrier – MDF panel – and, contrastingly, informed by the act of erasure, Parker’s works embody site specificity; their internal drama, without resorting to the expressive, is nonetheless remarkably representative of a space in which something – the act of drawing – happens. Hyper-specific, the work presents a stubbornly finite presence, decidedly foreign in relation to common contemporary practice dependent, for any trace of the sensual, upon recourse to an implied infinite regress. Work on view in the Kyoto exhibition will be completed during a one month residency on Parker’s first visit to Japan.