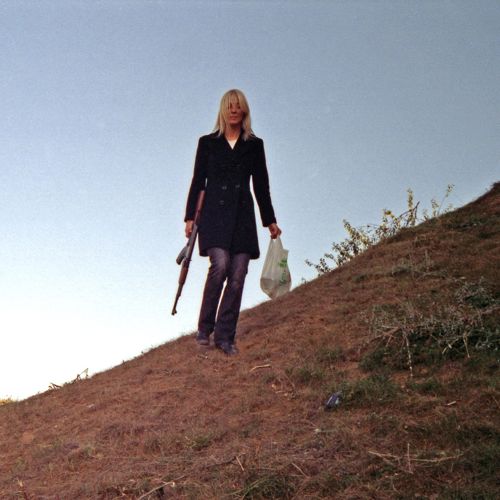 Milica Tomic´s work deals with a variety of social, political and existential issues. Tomic´s research revolves around the roles and identities we take on / are imposed upon us, and in particular the different roles in crime, victim vs. perpetrator – and not least how and why the roles sometimes shift. In this field she investigates war, and the change in the perception of war, which has come from dealing with terrorism, where war is no longer a last resort for a political conflict, but a permanent condition, posing the question: who is terrorized and who is the terrorist?

In Reading Terror we meet three newer and on-going projects:

Reading Capital – An installation featuring photos and a video of prominent Texans who, from their desk in the financial community, or at home in their armchair, recite Karl Marx’s Capital.

Container – A project that revolves around the war crime that occurred in Afghanistan in November 2001, where Taliban prisoners were loaded into containers and transported though the desert for several days, en route to prison. During the transport, Northern Alliance soldiers fired their rifles against the container to create breathing holes, killing many within. The few prisoners who did survive were later executed. Although the story was later revealed, no pictures exist, which plays an integral role in the project.

One Day, Instead of One Night, a Burst of Machine-Gun Fire Will Flash, if Light Cannot Come Otherwise – A video / photo action which shows Tomic in an artistic intervention in a public space, moving through the streets with an AK47 in hand visiting sites where antifascist actions has taken place.

ME contemporary is pleased to present Milica Tomic´s first show in Denmark since her participation in the group show Re-Act in Kunsthallen Nikolaj in 2005. Here she displayed her video work “I am Milica Tomic” questioning constructions of identity and nationality.

Milica Tomic was born in 1960 in Belgrade. A visual artist who lives and works in Belgrade and Vienna, her choice of media includes video, film, photography, performance, action, sound and light installation, web projects, and discussions. Tomic’s work centers on issues of political violence, nationality and identity, with particular emphasis on the tension between personal experience and media-made images. In 2003, Tomic represented Yugoslavia at the Venice Biennale.

One thought on “Milica Tomic”