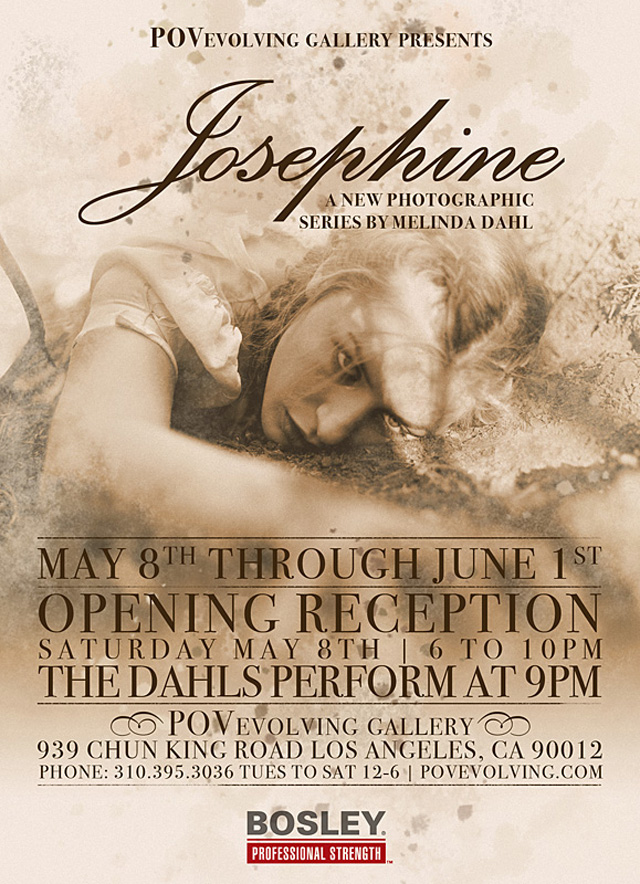 POVevolving Gallery & Print Studio is very happy to announce our upcoming exhibition opening this Saturday, May 8th ~ from 6 – 10 pm.

The event is the first multimedia fine art exhibit from DahlHouse Productions, the independent production company run by Melinda and her twin sister Caitlin. Together they fuse photography, music, and film to present Josephine as both a corporeal and pastoral figure, captured in the bare shoulders and elegiac expressions of Dahl’s models and the vivid landscapes that they confront.

Calling out from shadowy cliffs, crouched in forsaken gardens, and suspended atop a turbulent seashore, the women and the stories in Dahl’s work command more than one of the onlooker’s senses. Accompanying her photography will be the debut of “Josephine,” the song written by Melinda and performed by the twins’ other production, The Dahls – the band that’s had them packing clubs around Los Angeles for the past year. The track also features Rocco DeLuca and is engineered by famed producer Mark Howard (Lucinda Williams, Tom Waits, Marianne Faithful).

The highly anticipated music video for “Josephine,” directed by Caitlin Dahl, will also be debuted at the event.

One thought on “Melinda Dahl ~ “Josephine””