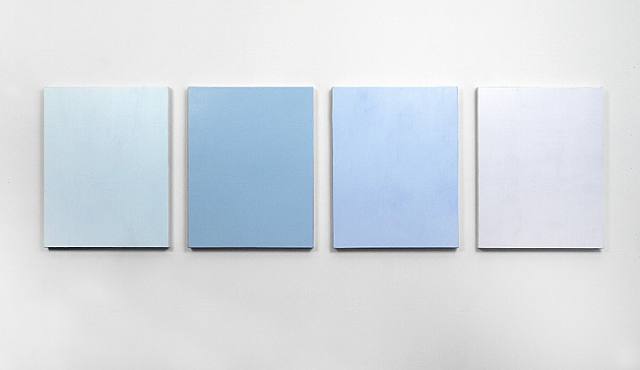 Newman Popiashvili Gallery is pleased to present a solo exhibition of Marcia Hafif. The gallery will be showing historic works – the Black Paintings from 1979-80 that were originally shown at Sonnabend gallery in 1981. Although Hafif has shown extensively in Europe and in the US for the past fifty years, this exhibition offers a rare opportunity for another look at Hafif’s early monochromes thirty years later.
Marcia Hafif published an article in Artforum magazine in 1978 titled “Beginning Again,” a catalyst for gathering artists under the title Radical Painting, which was the name of an exhibition curated by Thomas Krens at Williams College in 1984. The artists who were part of Radical Painting advocated a certain fundamentalism in painting – a stance that found more favor in France, Germany, Austria and Switzerland, than in New York. Hafif wrote that “although [her monochromes] may have an undivided surface,” they were “not merely of one color in one undifferentiated plane, each painted exactly like another.” The four paintings in the exhibition are composed of Burnt Umber and Ultramarine Blue pigments. The closer we look, the more dissimilarities we see among them, and a certain imagery appears in each.
Marcia Hafif always underlined the “prime importance” of the hanging of a monochromatic painting – “A monochromatic painting does not hold a tight focus in that its own energy spreads out to areas surrounding it, which is one of the reasons why walls today are white or neutral avoiding the color harmony automatically set up between the painting and a wall color.”
Notwithstanding their history, these paintings offer us a powerful viewing experience.
At the age of eighty, Hafif continues to work between New York City and Laguna Beach, CA. Her most recent show opened in November 2009 at Kunstraum Alexander-Buerkle, Freiburg, Germany and she is scheduled for a show at MAMCO, Geneva in April that coincides with the publication of a catalogue raisonné of her Italian paintings painted in Rome, Italy 1961-69.