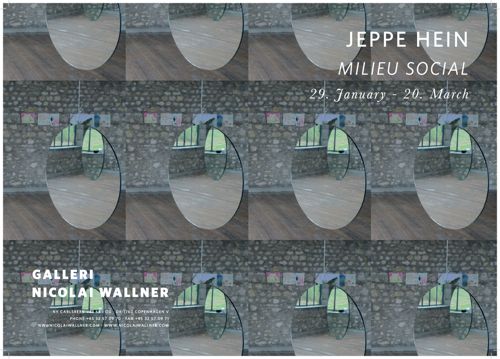 It is a great pleasure for Galleri Nicolai Wallner to present Milieu Social
a new installation by Danish artist Jeppe Hein.

Combining sculpture and installation with architecture and technology, Jeppe Hein sets up a dialogue between work, viewer and site. Like other of Hein’s work the particular installation for Milieu Social involves the physical presence of the viewer set against a pattern of minimal forms.

Milieu Social presents two rooms, one containing bicycle and the other a large mobile consisting of mirrored disks suspended from the ceiling. The two parts of the installation are connected by simple but ingenious machinery that allows the viewer to animate the mobile by moving the pedals of the bicycle.
Each of the mirrors in the mobile presents new views of the visitors caught in the middle of the seamless gallery space. Surrounded by mirrors, you become at once actor and audience, viewer and viewed, and your reflected image is simultaneously fractured and multiplied.

Ironically the person that is powering the work is at the same time excluded from seeing it. After taking seat in contraption it become obvious that a dividing wall obstructs the view of the mobile. Hein contests the accepted conventions of viewing and presents an energetic and playfully antagonistic relationship between art and audience. We are encouraged to participate in the creation of the artwork but are denied access to it. Hein likes to tease the viewer and carefully examines our individual and socially conditioned responses.
Importantly Hein’s artistic production contains its fair share of humor. There is an absurd fascination of overtly complex machinery and innovation. Though not necessarily the full answer to the world’s demand for clean energy, pedal power technology seems to have its own strange allure. It represents a certain causality that both puzzles and challenges the viewer.
With Milieu Social Hein seems to point to a new understanding of the exhibition space as a social environment. The exhibition deftly subverts preconceived notions making the viewer both instigator and object.