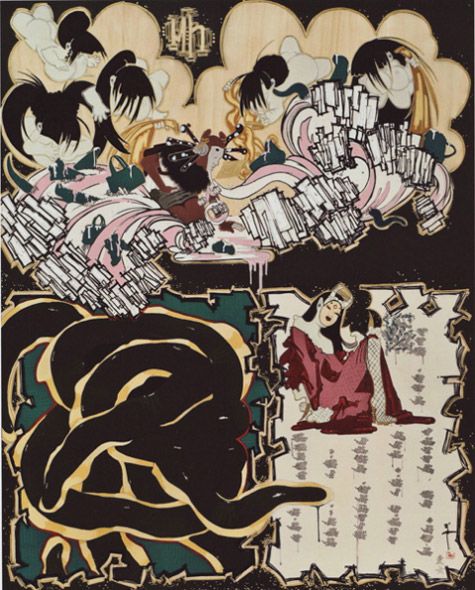 SALTWORKS is pleased to present mythologies and mash-ups, new paintings by New York-based American artist, iona rozeal brown from September 25 to November 6, 2010.  This is brown’s first solo exhibition at the gallery.

mythologies and mash-ups depicts an elaborately crafted universe of fantastical creatures with the purpose of creating an allegorical history rooted in African-American hip hop culture and synthesized with Japanese art historical and contemporary aesthetics.  The works are painted in flat planes of color and strong lines in the style of the Ukiyo-e woodblock prints of the Edo period.  brown continues her investigation of the power of consumer society to undermine individual identity introduced in her highly successful Blackface series (2001-5).  This new body of work reads like an epic fable, lush and hallucinatory, in which lessons of the hip hop-era gods and goddesses are preached to the young, often falling on deaf ears.  The spiritual and the material worlds co-exist in a chaotic realm of good versus evil, which is at once contemporary and timeless.

brown first embraced Japanese culture and aesthetics as a young child with a fondness for anime.  Soon, she found herself introduced to Japanese puppet theatre (Bunraku, Kabuki).  As a young adult, she received a fellowship to study the elements of Kabuki and Noh theatre in Japan.  brown then delved into the study of Japanese Ukiyo-e woodblock prints and this style continues to influence her work today.

brown portrays he path of the hero (in this case, heroine), a common theme in Japanese folklore, in the mixed media on panel piece, a children’s story (2009).  A swarm of evil cherub-like demons impose their infectious consumerism upon a young schoolgirl who becomes overwhelmed by the deluge of materialism from which she cannot escape.  In the lower right sits the menacing character, E.I.N. (Everything I’m Not), masked and dressed provocatively next to a pool of sinister eel-like creatures.  The abstracted calligraphy characters are fictitious language based upon a number system, which, when translated quotes a Slick Rick song of the piece’s title, “This ain’t funny, so don’t ya dare laugh, just another case ’bout the wrong path.”  As in true fable style, the image is dark and the lesson poignant.

One of the more empowering pieces in the series is E.I.N. intrusion (watch out for the big girls) (after Yoshitoshi’s “onogawa Kisaburo, from One Hundred Tales of Japan and China”), 2006.  In the piece, a female DJ is clearly neither afraid nor intimidated by the E.I.N. character, as expressed by the DJ blowing smoke in the monster’s face.  E.I.N. suffers from a Gollum-esque obsession for material possessions which has turned her into a hideous creature.  Yet as a DJ controls the quality of the sound and volume of her music, so this DJ maintains control of her values, ideals and therefore, self-worth.  The Edo-period artist Tsukioka Yoshitoshi (1839-92), on whose work this piece was based, was a great influence on brown’s new body of work.  Yoshitoshi’s works were renowned for their drama and cleverness and often depicted Kabuki scenes and actors.

Many of the core works that form this exhibition were commissioned by the Museum of Contemporary Art Cleveland for the exhibition iona rozeal brown:  all falls down and received the 2009 Joyce Award for Visual Art. The MOCA Cleveland museum catalog published by Hatje Cantz.  Essay by Megan Lykins Reich.  Interview with the artist by Isolde Brielmaier.  The catalogue will be available for sale at the gallery.  Signed copies will be available from the October 16 artist talk and book signing.

iona rozeal brown received her MFA in painting fro the Yale University School of Art, and her BFA in painting at the San Francisco Art Institute.  brown also completed a residency at the Skowhegan School of Painting and Sculpture. brown currently lives and works in New York City.  She has had solo exhibitions at the following institutions: MOCA Cleveland, the Wadsworth Atheneum and the Spelman College Museum of Art.  brown’s work has been acquired for the collections of the Norton Family Collection, the New Museum New York, NY, the Milwaukee Art Museum, the Wadsworth Atheneum Museum, Yale University,  the Studio Museum in Harlem, the Altoids Curiously Strong Collection, the Rubell Family Collection, Miami, FL and the Hirshorm Museum, Washington, DC. brown will have a solo exhibition at the Krannert Art Museum at the University of Illinois Urbana-Champaign, Jan – May 2011.

One thought on “Iona Rozeal Brown”