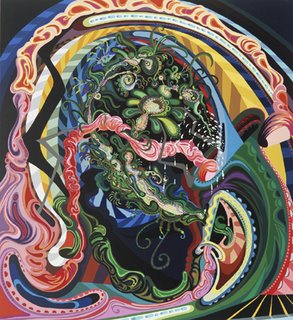 Erik Parker
Half Cocked
December 16 – January 20, 2007
Taka Ishii Gallery is pleased to announce Half Cocked our third solo exhibition with New York based artist Erik Parker. The artist’s recent museum exhibitions include Untitled (for H. C. Westermann), The Contemporary Museum, Honolulu (2006), One Planet Under a Groove, Bronx Museum, New York traveling to the Museum Villa Stuck, Munich, Nation, Frankfurter Kunstverein,Frankfurt and Painting Pictures, Painting and Media in the Digital Age, Kunstmuseum Wolfsburg, Wolfsburg (all 2003).
Erik Parker’s early prominence was based upon the success of text-based paintings. The earlier works, taking a visual cue from subcultures, in general, and the vocabulary of hip-hop, in particular, mapped a series of relationships within various cultural movements and moments.
Researched in depth, the paintings served as both as a visual archive and tribute to those most important in shaping the artist and his place within the culture. In subsequent works, painted text became housed within organic forms, sometimes abstract, sometimes clearlyrepresentational, these forms, ultimately placed in the foreground of Parker’s paintings, marked an explicitly inward-turn to the work. For a brief period, text was nearly replaced altogether by a playful interest in shape and color, elemental concerns relating to the structure of painting and a sign of an artist comfortably in place.
The present exhibition represents a further development in Erik Parker’s work.
While including a selection of paintings, the show is largely comprised of painted works on paper, signaling a shift in the artist’s practice towards a less constrained aesthetic. Words are re-introduced in the drawings, though in the work text serves in a new, expressive capacity.
Attempting to re-place himself within a changing cultural environment – his (art) world of 2006 is vastly different from that of 1999, the year of Parker’s debut – Erik has adopted a free-form style, influenced by sources as diverse as space-rock and Mayan culture, to further investigate the place of his painting within the present.
The exhibition’s title Half Cocked expresses both the anxiety and bravado co-existing in this new body of work.