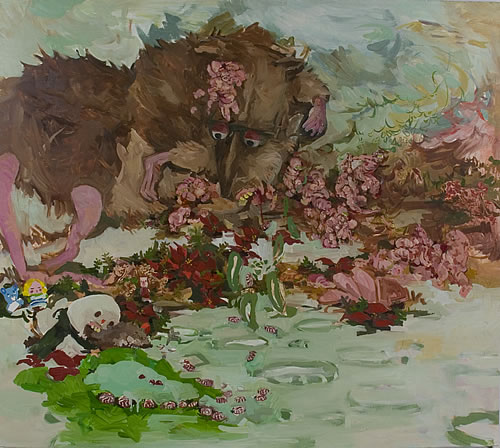 With the 18 paintings that are displayed in Zurich, Frasch invites the beholder into her cabinet of
sexual horror. Her works reflect the excessive confrontation with sexuality in contemporary society
that has become inevitable due to its constant presence in the Internet and media. This is true to
such an extent, that is has become a part of the everyday routine just like the daily mouse click. It is
not just the cadence of images that we are exposed to, but also the form of representation in
pornography, which have moved towards detailed, exaggerated close-ups. In this iconography of
sexual horror the boundaries between sexuality and violence seem to be diminishing.

In the work Dog Eat Dog Frasch depicts a pack of dogs that attack each other. The wild dogs that
are associated with wolfs can be read as the epitome of vice and in that way once again fit the
theme of sexual horror. The frontier between violent appropriation and lust seems to have vanished.

Influenced by feminist video and performance artists like Joan Jonas or Vivienne Dick, the artist
herself is familiar with those media. Their procedures are mirrored in her paintings, where some of
them appear to be like film stills where densely filled clusters have to balance with vague and fuzzy
areas.