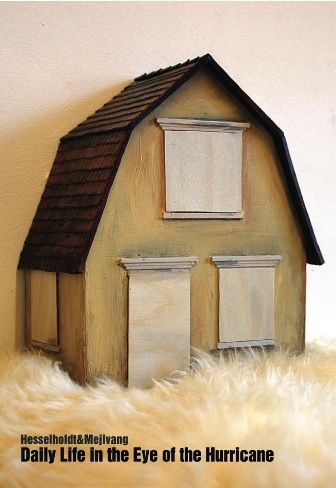 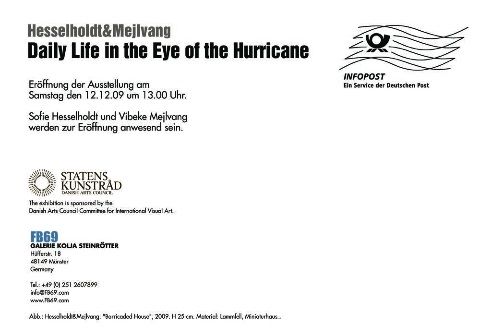 The Copenhagen based art duo Hesselholdt & Mejlvang have worked together
since 1999. They graduated from The Royal Danish Academy of Fine Arts in
2006. Their works revolve around a committed and often critical addressing
of the reality that surrounds us: socio-cultural, political and
psychological issues as well as race and gender questions.

But far from a dogmatic form it is a complex and elaborating investigation,
where the artwork opens for dialogue with its environment. By imploding
fragments from the visual culture of everyday life into new, revealing and
often humorous constellations, Hesselholdt & Mejlvang comment on Western
values.

The duo works in various medias such as sculpture, ceramics and
installations, with works or exhibitions that often have an almost
physically integrating effect on the viewer.

“Daily Life in the Eye of the Hurricane”

At the centre of a fierce hurricane, there is a small area where the weather
is calm, the sky is clear, and the winds are just light breezes. This area
is called the eye of the storm. Surrounding the eye is the most violent part
of the hurricane, a ring of towering thunderstorms. But although the area of
the eye is calm, strong winds may extend well into the centre.

“Daily Life in the Eye of the Hurricane” is a tableau created from a palette
of personal reflections, nature phenomena and large-scale political issues.
War, hurricanes, nationalism, trespassing, power, barricades, boarders and
extremism meet the beholder. Creative destruction, angst provoking crisis
and life confirming humour are nerve threads stitching together the spheres
of daily life and politics in the works of Hesselholdt & Mejlvang.

The exhibition is executed in a wide variety of media such as burned flags,
miniature sandbags, a crashed airplane and an oriental rug. Ceramic beings
like black Santa Clauses and executed no-brainers all inhabit the tumultuous
landscape of the Eye.

All these impressions and elements shape an exhibition where doubt is the
necessary atom in a constellation of given truths. And where the
undefeatable optimistic human life force is the compass giving out
directions in an inhumane world.
Hesselholdt & Mejlvang