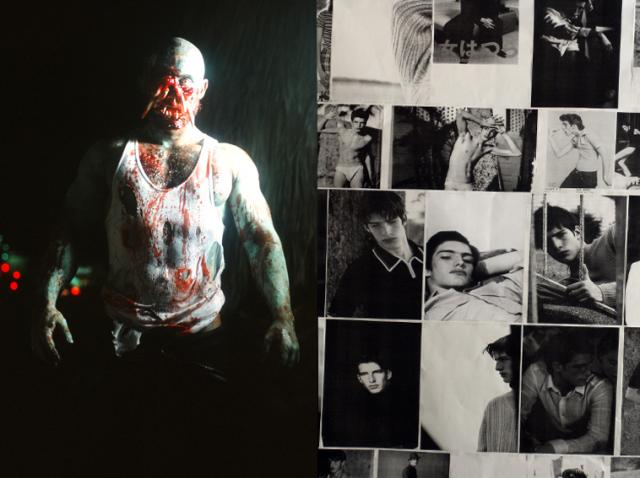 Javier Peres is pleased to present Bruce LABRUCE’s first solo show with Peres Projects in Berlin. “LA Zombie: The Film That Would Not Die” will consist of new works on canvas and the European sneak peak of LaBruce’s most recent film, LA Zombie, starring Francois Sagat.

Now I remember why I love filmmaking. What other pursuit allows you to experience despair and jubilation all in one day, and twice over? Jason picks me up in his trusty Datsun and we head for the lofts on Wilshire where the production office is. The air-conditioning there is broke and with all the guys staying there with no openable windows it’s getting pretty funky. Because the big car crash scene has been changed to a location in Topanga Canyon to be shot on Sunday night, we have the opportunity to shoot another full day of Francois in various locations in LA both dressed as a homeless person and as an alien zombie. Sometimes disaster can turn into advantage.
We did have an awesome, experienced First A.D. in place, but he dropped out about a week before shooting when he got a paying gig. A lot of the people who have volunteered to work on this project for little or no money are dropping off like flies because they just can’t afford to turn down other work if it becomes available. I suppose it has something to do with the economy. I guess the economic disaster also explains why there are so many more homeless people than I’ve ever seen in LA. Anyway, without a real First A.D., the shoot is pretty chaotic today. Laszlo and I are basically doing it ourselves, which is a little distracting. At least we have walkie-talkies and GTS, which makes transportation and finding locations a lot easier. So we head out this morning with our little convey communicating with ten-four good buddies and copy thats.
The first location has sexy homeless Francois gleaning along a chain link fence down on a street that overlooks downtown. I was inspired to play up the homeless aspect of the character by watching Agnes Varda’s “The Gleaners and I” for the first time recently, a meditation on those who pick up waste and garbage and basically pick clean the bones of society. Actually my last film, Otto; or, Up with Dead People, was also about a homeless zombie, partly inspired by Varda’s movie “Vagabond”. So I guess I’m pretty much stuck on one idea, except this time it’s going to be a full on porno. How do you like them apples…