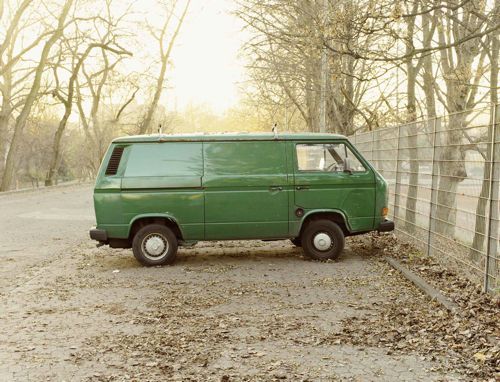 “On bicycle tours I would come across cars just standing there in the countryside. I guess my first reaction was to look out for the owners. Most of the time, I would see no one and thus was left alone with the situation, developing a relationship to those vehicles that I hadn’t expected. From then on I started to regard these abandoned cars in the scenery as if they were actors on a stage and started to collect their wit and tragedy.”

The Jack Hanley Gallery is pleased to present “Autos”, a solo exhibition of photographs by Bernhard Fuchs.  The series “Autos” is a collection of images of cars parked in parking lots and on roadsides.  Their stillness haunts, their solitude mystifies.  In the absence of human life, the cars in Fuchs’ series take on their own pulse, their function moves beyond expected utility.  Here, in a moment of the “happened upon,” travel freezes in contemplation.

Born in 1971 in Haslach an der Mühl in Upper Austria, Bernhard Fuchs studied with Bernd Becher at Kunstakademie Düsseldorf and with Timm Rautert at Hochschule für Grafik und Buchkunst Leipzig; he currently lives and works in Dusseldorf. Since 1991, his work has been exhibited in Germany and abroad: Museum Ludwig , Cologne Germany; Museum Folkwang, Essen Germany; Goethe Institute Washington D.C. and Paris. Several of his photographic series including “Autos” have been published internationally in monographs of his work.