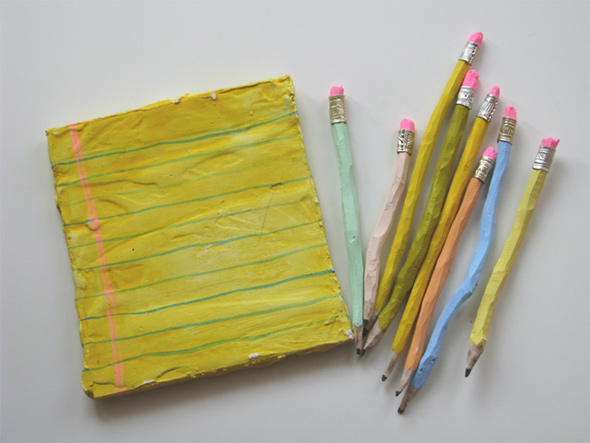 P·P·O·W is pleased to present Ben Gocker’s first solo exhibition, There is really no single poem. Quoting from a letter from poet Jack Spicer to poet Robin Blaser, Gocker takes his title from Spicer’s intriguing claim, “There is really no single poem.” Though there are no poems per se to be found among Gocker’s bright installations, drawing series, and wall-mounted sculptures, there is significant attention paid to the idea that no work of art should or can exist alone. As Spicer put it, “[Poems] cannot live alone any more than we can.” This creative ethos is reflected in Gocker’s inscription of the names of numerous friends, acquaintances, and loved ones in one of the show’s centerpieces, the large painting titled simply Names-as it is in Gocker’s display of book covers for imaginary books, a sort of fantastic prelude to unrealized genius, called, Floating Collection. Each of these works contains elements that cannot stand in solitude, that invite other elements to surround, contextualize, and interrogate them. Each of these works is brilliantly illuminated by others in the show; Gocker emphasizes interaction, dialog, allusion, and sociability even as he mourns the ephemeral service into which these forms are pressed.

Gocker, like Spicer, takes an interest in the series. Like Claes Oldenburg, Yves Klein, Richard Tuttle, and Martin Kippenberger, Gocker knows when to allow color and form to take center stage. This formal timing is on display in the large installation piece Early Poem, a mix of both found and made objects arranged on a page-like platform. There is also Scroll, an extended, obsessively detailed panoramic illustration Gocker has been at work on continuously, for over three years. These works construct differently punctuated narratives of time and invite the viewer (or ‘reader’) to play with ideas of sequence, at the same time creating a kind of half-imagined bridge between the vernaculars of American folk art and the tactics of minimalism.

Other works include Untitled, a triptych of large color wheels drawn on plaster in colored pencil. Another wall will be hung with a grid of thirty ‘drawings’ on plaster pages, notes the artist has saved over time and redone on the pages, reproductions of sketches from his notebooks. Lastly there will be a box, sometimes assembled sometimes not, with carved and carefully painted staffs reminiscent of Brancusi’s Endless Column, titled Calendar, which Gocker will be changing throughout the course of the show.

The show is also concerned with space, especially as regards connecting the physical to the conceptual via the act of naming. Most pointedly, a series of twenty-two monochromes entitled Death & Friends evocatively bears witness to the nature of Gocker’s relationships, bringing friends into the room simply by naming. These objects are totemic: stand-ins for people and memories in Gocker’s life, they inspire recollection, even as they refuse to substitute fully for that which can only exist in memory, which is to say, a tale that may or may not be recalled in full. Here, as with all of his work, a practice of memorialization is left open to the viewer; the object recalls not just an independent event but its own making, interrogating the border between the completed work and the limitless possibility of expression with which the work began.

Ben Gocker was born in Rochester, NY in 1979. He received an MFA in poetry from the University of Iowa Writers’ Workshop. He currently lives in Queens, NY and is a librarian at the Brooklyn Public Library.