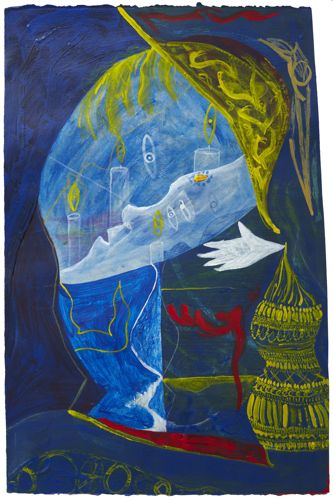 It is a great pleasure to announce that Galleri Nicolai Wallner will represent young Danish artist Alexander Tovborg (b. 1983). Alexander Tovborg has studied at Staatliche Akademie der Bilden Künste in Karlsruhe and is currently a student at the Royal Danish Academy of Fine Arts from which he will take his degree in the Spring of 2010.

Tovborg explores different genres of art including painting, drawing, sculpture, and performance. He creates compelling figurative and metaphysical imagery that seems to be drawn from his own internal imaginations as well as combined with elements from Western visuality and foreign cultures and religions. Tovborg seems to find a sincere and genuine expression in religious and spiritual art that he transforms into paintings and sculptures – creating his own myths in the process.  His work presents a series of figures that act almost as arch types summoned from the interplay between collective unconscious and individual imagination. Religion or perhaps more precise spirituality plays an important role in the imagining of his works and it is obvious that the search for inner enlightenment is pivotal for Tovborg.

Not afraid of depicting the humble or the elevated, Tovborg examines man’s eternal relation to both the mundane and the spiritual. In his most recent works he has also begun to incorporate different elements of popular culture in particular music. It seems like Tovborg has found a new source of energy in the glossy products of the contemporary music industry comparative to that of spirituality and religion.

Tovborg’s work is marked by a unique vision and a rarely seen sincerity – we look forward to present his first solo exhibition in the gallery Autumn 2010. For more information please contact the gallery.