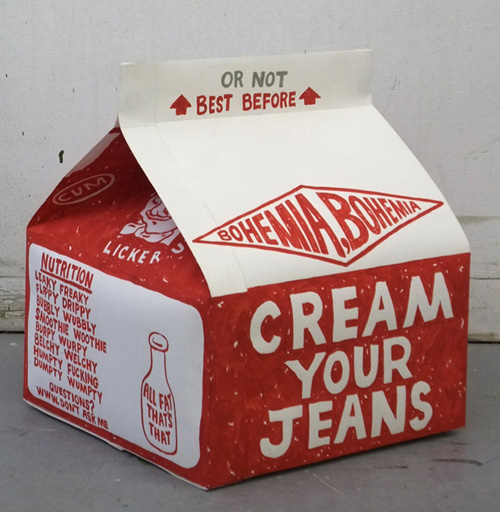 ‘DUMMKOPF’ features for the first time in Germany, works of the Canadian artist Adrian Norvid. Small works, sculptures, and wall-filling drawings, echoing the so-called ÒWimmelbilderÓ, all drawn on or made of paper, are Adrian Norvid’s genre. Born in 1959 in London, the Canadian has taught drawing at Concordia University, Montreal since 1989. His works are represented in important Canadian collections, such as the Musee d’art contemporain de Montreal and the Musee du Quebec.

Norvid’s wall-filling works are overloaded with imagery. Often excessive and graphically distorted, they occasionally take on the character of pattern or wall-paper. Typical for a ‘Wimmelbild’, the onlooker has to make their way through the complex contents of the picture. A whole host of image- and word-quotations, ranging from humorous to sarcastic, are set against each other. Association-rich, Norvid’s works have an often obscure, narrative character, analyzing popular knowledge, cliches, folksiness, or nostalgia and debunking them.

The largest work of the exhibition is ‘Tom Dick and Harry Haus’, 274 x 635 cm: A half-timbered house with ramshackled roof is populated by strange figures such as a bosomy maiden with ‘Weisswurst’ chain, a stork with telephone receiver, a ‘Rumpelstilzchen’ with giant toothbrush, and Van Halen with Volkswagen emblem. On the left side of the house, right over the entrance door we read: ‘The yummification of Germany’, a multilayered wordplay. Norvid is tracing Germanness: politics, Weisswurst, Volkswagen, Birkenstock-sandals, history, fairy tales, language. Once access is found, the work, in the manner of the ‘Wimmelbild’, consumes our attention and drives us to seek out further discoveries. The artist takes us on a journey into Germanness. Like the joint smoking Snoopy on the roof he takes us on a ‘trip’. But at the end all mysteries remain unresolved. In ‘out of stock’-sandals the artist, absorbed in a book, leaves the ‘house Germany’ in a hopeless mix up behind him. Whirring chaos remains.
In contrast to the overloaded, huge drawings are Norvid’s smaller works on paper. Here individual aspects, which could have sprung from one of the ‘Wimmelbilder’, get their own forum and are brought to a point.

Norvid’s sculptures form a third facet of his work. Built of paper, everyday life articles, such as school milk cartons, are snatched from their usual context and, by mere inscription set into a completely new one. Such surprising turns typically reveal themselves to the onlooker only on closer inspection. Formally close to cartoon or comic, Norvid works with sarcasm, irony and plenty of humor. While keeping their autonomy, small drawings along with wall-filling works, paper sculptures and revised, found objects, form installations of baroque extent. They let the onlooker dive into the complex thoughts of the artist, which lead our subjective expectations and moral conceptions ad absurdum. Whoever allows themselves to get involved, will find himself at times with a bashful smile, a furrowed brow, or even roaring a laughter.