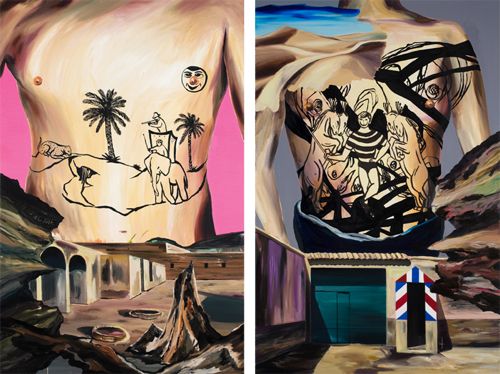 Galleri Christoffer Egelund is very proud to present Adam Saks’ first solo exhibition in the gallery with the title Dry Your Eyes. The artist works with different aspects of the depth and psyche of humanity and is fond of using different image elements from high and low culture, magazines, computer drawings and old tattoo motifs. In this exhibition Adam Saks presents new paintings and watercololurs, using the human body as basis for an extended narrative.

In the exhibition Dry Your Eyes you will meet monumental human bodies where the skin with its superimposed signs and tattoos bears witness to vanity, hierarchies and aggression. Fragments of rockscapes and building structures reach across the bodies, creating a kaleidoscopic space that alternates between the tattoo signs, violent natural settings and predators wriggling and turning their way out of rock formations, threatening to break through the canvas. Adam Saks´ pictorial technique alternates between the expressive and cool calculation, sampling motifs from a distant past with such themes as loyalty, love and brutality. It is in this collage-inspired crossover field Saks creates a relevant and contemporary universe.

The title of the exhibition, Dry Your Eyes, refers to a situation with a new beginning – a kind of catharsis or purification process where the signs on the marked bodies bear witness to their past or personal history. In connection with the exhibition a catalogue with a text by art historian Tine Nygaard will be published.

Adam Saks (born 1974) graduated from the Royal Danish Academy of Fine Arts (1993-99) and from Hochschule der Künste (HdK, 1996/97) in Berlin. Concurrently with Dry Your Eyes, Saks will present the solo exhibition Visual Voodoo at AROS Aarhus Kunstmuseum (23 April – 1 August 2010). Adam Saks normally lives and works in Berlin and has exhibited extensively both in Denmark and abroad. He has had solo exhibitions at, for instance, Nordiska Akvarellmuseet in Sweden, Lieu d´art Contemporain in France and South Jutland’s Art Museum, and has also been invited to join the Vilnius Painting Triennial in 2010 at the Contemporary Art Centre in Lithuania. Adam Saks is represented in the collections of Denmark’s National Gallery, KUNSTEN – Museum of Modern Art Aalborg, Nordiska Akvarellmuseet, South Jutland’s Art Museum, Malmö Art Museum and others and received the prestigious Niels Wessel Bagge’s honorary scholarship in 2009. In addition, Saks& rsquo; books Sealevel, Kleinheinrich Verlag, with text by Kay Heymer (director of Düsseldorf Kunstmuseum), and Elephant Island, Kerber Verlag, were published in 2009.