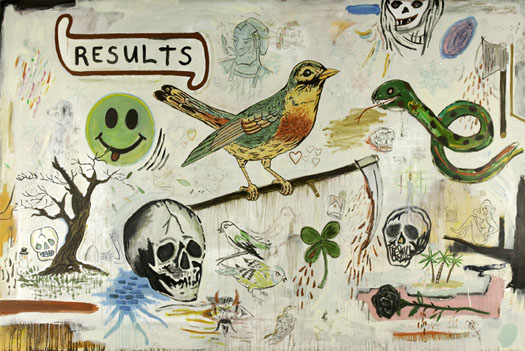 Wes Lang’s latest exhibition “Smile, It’s a Grey Day” consists of 17 new paintings. Meditating on the recent loss of several loved ones, the artist professes a sometimes veiled reverence for life through his tattoo-inspired imagery. Combining the same deft maneuvers of brush as he has long-employed with the skin-artist’s needle, Lang translates masculine tattoo templates and works from within the confines of stylized graphics of flash art, continuing the tattoo tradition of valuing appropriation over unique imagery. The tattoo tropes and one percenter’s dismissal of social constraints is consistent with Lang’s approach to art and life.

Unafraid of influence, Lang channels Philip Guston, Martin Kippenberger, Cy Twombly and Basil Wolverton — a celebration of disparate forebears, re-combined in an alternately cantankerous and nostalgic American stew. He also finds solace in sources as wide ranging as self-help manuals to country and rock song lyrics. In the end, Lang often expresses his outsized optimism openly in titles like “Everybody Cares, Everybody Understands,” “Don’t Tell Me There’s No Hope At All,” and “The River of Golden Dreams.”

With the keenest eye toward our ephemeral fringe — Lang champions human faults, celebrating the patterns in our rapacity—a familiar vernacular comfort becomes the voice of longing for a world without anchor.

This is Lang’s fourth solo exhibition at ZieherSmith and the first to feature solely painting on canvas. His work has also been seen in shows at Alexander and Bonin and Andrea Rosen Gallery in New York, Dealim Museum, Seoul; Peres Projects, Berlin, and V1 Gallery, Copenhagen among many others. He was named one of 2009’s top fifteen young artists by Interview Magazine. A new publication featuring the work of Lang and Donald Baechler, entitled Skulls and Shit , is available from Ajax Press.