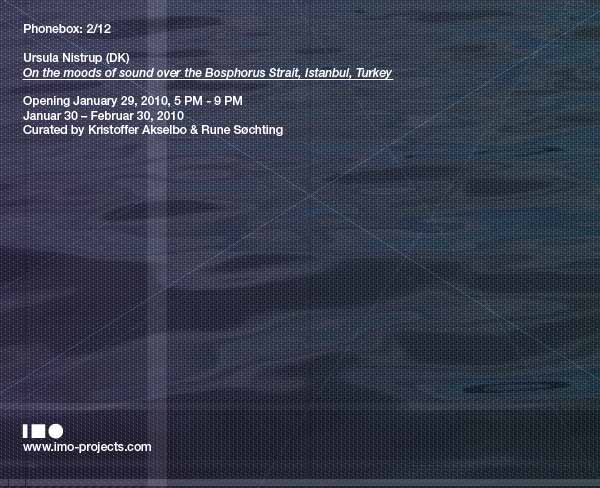 Taking photography and architecture as a starting point, Ursula Nistrup examines the relationship between space and spatial representations, in particular the relationship between sound and space. Her new work On the moods of sound over the Bosphorus Strait, Istanbul, Turkey is based on recordings of horn from ships that daily maneuver the Bosphorus Strait. The multiplicity and tonality of the horns evoke the sound from the orchestra pit in a concert hall before the beginning of the concert. The motif of a unique and unintended “concert” emerges and with it the question of the relation between space and listener. Ursula Nistrup has studied at Glasgow School of Art (MFA) and CalArts.

Ursula Nistrup’s work is the second in a series of sound-based works presented in Phonebox at IMO in the first half of 2010. The series is titled Sounds Up Close #1-12 and is curated by Kristoffer Akselbo and Rune Søchting. It is the intention to present a number of important artists who work with sound as a medium. The different pieces reflect a broad variety of approaches to the work with sound as medium. Over a period of six months a total of twelve pieces will be presented, each for a fortnight. Some of the up-coming artists in Phonebox are Alejandra and Aeron (ES/US),  Ultra-red (US) and Jio Shimizu (JP).

One thought on “Ursula Nistrup”