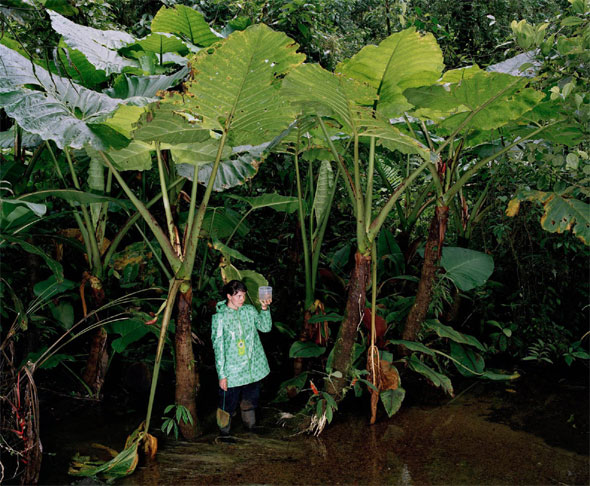 In the exhibition Close observer Sanna Kannisto embraces the idea of the photograph as an objective document, but at the same time a strong need for a personal expressive narrative is also present. The artist observes natural phenomena such as rain, streams, spider webs, bird calls, plant reactions, snake movements but also her own individual position of the actor/ experiencer in producing and interpreting the data. Sanna Kannisto’s project relates to a topic that has aroused interest in visual art circles in recent years, namely the terrain that separates the arts and sciences. In many ways, the project also relates to the history of scientific visualisation. Her pictures also incorporate humour and a sense of the absurd, which point to surrealism and structuralism, to the relationships between avant-garde and anthropology.

‘…Sanna Kannisto has focused on plants and animals in tropical rain forests for years. She has gradually accumulated an impressive body of work that examines, in a style both rigorous and deli-cate, not just the wondrous species of the tropics but the metaphors of seeing, science, photography and art. Her work presents us with a collection and a theatre; it focuses attention on plants and animals that one could rarely hope to see in their natural habitat, and even more miraculously reveals and unleashes the mechanisms of this theatrical presentation wherein lie its two wonders.’
(Harri Laakso, ‘Lucidities of the image ~ On the Photography of Sanna Kannisto’, 2009, Foam magazine, #19, p. 151-154)

In her work, Sanna Kannisto explores the relationship between nature and culture and the theories and concepts which are used to approach nature within the arts and sciences. Her methods, field studies and the objective scientific way of presenting the objects, refer not only to anthropological and archaeological ways of working, but also to studio portraiture and staged photography.

Sanna Kannisto was born in 1974 in Härmeelinna, Finland. She currently lives and works in Helsinki. She studied photography both at the Turku School of Art and Communication and at the University of Art and Design in Helsinki. She has exhibited her works in many solo and group shows widely since 2002, including the Masters of Arts at The Finnish Museum of Photo graphy in Helsinki, Personally at Kulturhuset in Stockholm, Self Timer at Kunsthalle Fridericianum in Kassel and The Faraway Nearby at the White Box in New York, Repeat All at the Centro Cultural Matucana 100 in Santiago de Chile, Research and Invention at Fotomuseum Winterthur, Switzerland, Arctic Hysteria Onscreen at the Museum of Modern Art in New York and elles@centrepompidou at the Centre Pompidou in Paris.
(Published by Foam international photography magazine, #19/Wonder, Summer 2009)