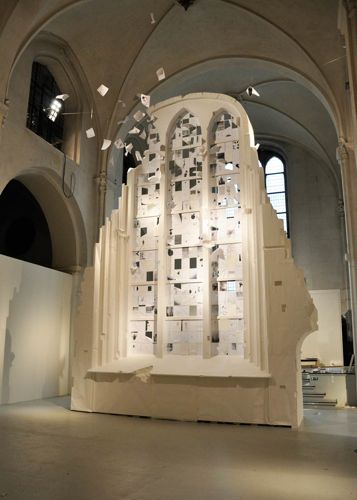 With his tragicomic performances, impressive installations and not least his fascinating and poetic paper cuttings, Peter Callesen has gained a position as one of today´s most courageous, subtle and imaginative Danish contemporary artists. The exhibition Skin of Paper for the first time brings together a major selection of new works as well as earlier productions at a Copenhagen venue.

With his new works, referring to the architecture of Nikolaj, Copenhagen Contemporary Art Center, Peter Callesen opens the door to a spectacular and existential universe of magic and fragile paper cuttings. The main elements of the exhibition are a site specific paper construction and a grand cardboard building: statements that include the building as a metaphor for the human self. The latter work, the central My Castle, in its construction refers to the church towers of Nikolaj and consists of labyrinthine passages where direct references can be found to Callesen´s modus operandi through a series of art videos and documentations of his performances. A common feature in many of these performances is the heroic endeavor to achieve and conquer the impossible, as well as a humorous picture and a debunking of the stereotyped masculinity. A trip around the nooks and corners of the castle thus also becomes a trip in Peter Callesen´s inner universe of intricate and impossible dreams.

The work White Window plays with a veiling of the borderline between the architecture of the Art Center and the porous, fragile shell of the work itself. It has been made specifically for Nikolaj´s church space and is a nearly 1:1 copy of the large window at the back of the Lower Gallery, consisting solely of 264 sheets of A4 paper – sketches and copies of earlier works. In the side aisle of the gallery, the work White Diary is presented, an elaborate paperwork wondrously detailing the reflections, fantasies and physical features to be found in the human head. There are furthermore 20 A4 paper sculptures, each of them evoking fantastic images and humorous narratives.

Peter Callesen´s ability to create stories and dramaturgies out of a humble A4 sheet of paper with great technical skill, finesse and contemplation has made him a unique and notable artist on both the Danish and international art scene.