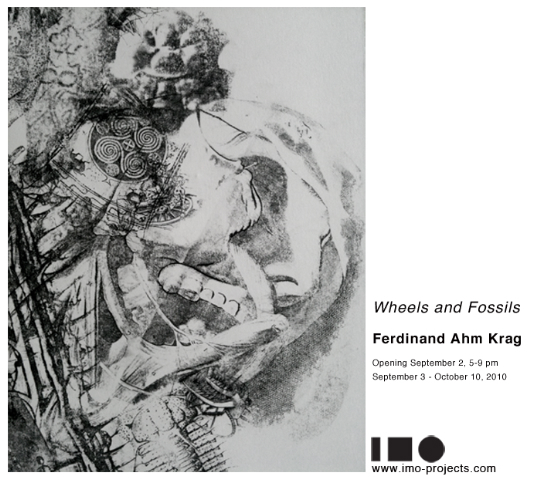 For the exhibition Wheels and Fossils on IMO Ferdinand Ahm Krag presents around twenty paintings, drawings and objects made in the period 2005-2010. Some smaller drawings have been five years in the making, while other and larger works were made just recently. Ahm Krag has also worked with a new type of irregular image that is made by beating standard MDF pieces.
The exhibition presents two video sequences with the title “How to construct a face, how to make an expression’. One video shows history’s first computer animated face created by Frederick Parke at the University of Utah in 1972. The second video is a clip from the television series ‘Cosmos’ (1980), written and narrated by astronomer Carl Sagan. The video presents a re-enactment of an ancient Japanese legend. In an old myth it is explained to us why Japan has a certain crab species, whose shield ‘represents’ a face. And not just any face, but the exact face of an angry samurai warrior. At the end of the sequence, Carl Sagan reveals the ‘natural’ explanation to this face: the face has slowly been exposed onto the crab shell throughout the past 900 years through the mechanism of what Charles Darwin called ‘artificial selection’. Ferdinand Ahm Krag has included the videos based on two reoccurring themes in his drawings and paintings. One of theme could be termed ‘THE PROBLEM OF THE FACE’ – How do you get one? How do you get rid of it again? How do you live with it? How do you live without it? The second theme relates to our dubious notions of artificial and natural. It is Ferdinand Ahm Krags point that our conceptual apparatus around “artificial” and “natural” sometimes prevents us from experiencing nature, where it really is.
Ferdinand Ahm Krag also shows a series of acetone prints consisting of motifs from natural history and cultural history. They are based on the perception of ‘images’ as organisms that live and die, and therefore create fossils to be deposited in sediment layers of images. Ahm Krag is influenced by the idea that these sediment layers of images have been blown to smithereens and rotate in an enormous cloud that has been captured by a new star after the death of the sun. Image fragments cluster in so-called ‘planetesimals’ – the forerunner of a planet. Here the image material creates a so-called ‘PRIMARY CRUST’ – the first crust of the new exo-body.
About his method Ferdinand Ahm Krag states: “When you make images from such fabulous grounds, as the above, the bottom line in the conceptual bookkeeping doesn’t add up. But figures rarely add up at all when dealing with fantasies. The idea is to move beyond the bookkeeping and find new concepts there.”
Ferdinand Ahm Krag graduated from The Royal Danish Academy of Fine Arts in 2006. He has been nominated for the Carnegie Art Award 2008 and was awarded the Arken Museum of Modern Arts travel grant in 2010. He has participated in numerous museum shows. In 2011 Ferdinand Ahm Krag will have his first solo museum show at Esbjerg Kunstmuseum.