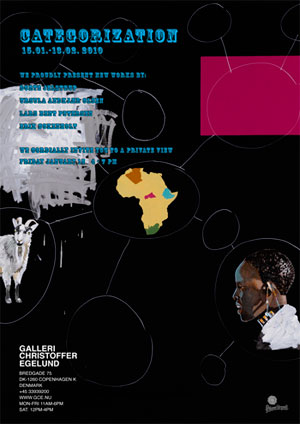 Galleri Christoffer Egelund is proud to present the group exhibition Categorization where four Danish artists are presented: Dorte Jelstrup, Erik Øckenholt, Lars Bent Petersen and Ursula Andkjær Olsen. With their unique individual style, they each contribute to a varied and thought-provoking exhibition. Hence, visitors can experience everything from montage and drawing to painting, sculpture and poetry.

The exhibition Categorization focuses on these years’ enhanced trend of categorizing and segmenting everything and everybody. In this context, we could say that the four artists question especially the type of categorization that generalizes and trivializes our concept of human beings and life – something that an increasingly simplified news stream holds a substantial responsibility for. Thus many of the works engage in different kinds of representation criticism. In other words, the goal of the exhibition is not to contribute towards increased categorization, but on the contrary to question the kind of outlook that stems from this simplified trend towards categorization. Via the exhibition, the visitor is confronted with new and unexpected questions which challenge the spectator to take a more reflexive approach to our existence in the world, and hence to a potentially more sensitive approach to human life.