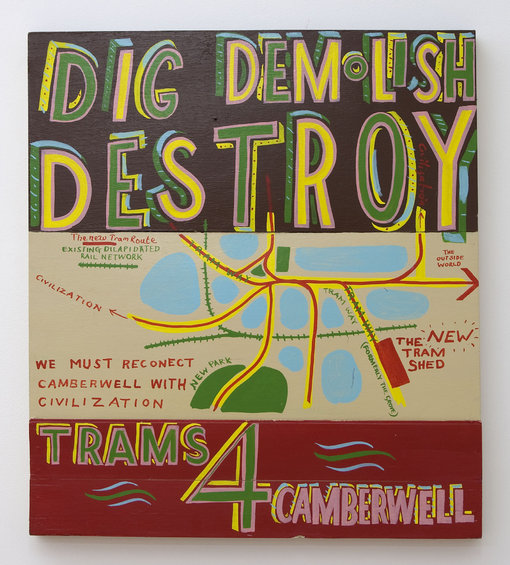 This is a British election year and London based artists Bob and Roberta Smith want to be involved and are keen to have their say!

Bob and Roberta Smith’s third solo exhibition at the gallery, provides them with the perfect platform to get YOU involved. During the course of the show Bob and Roberta Smith are inviting everyone to an event held each Saturday during March at Hales Gallery. They are offering the opportunity to be part of a mass letter writing to politicians on a wide range of subjects as diverse as:
Was it right for the Mayor’s office to cut funding for the anti-racism festival RISE
What is Hilary Benn doing to protect the environment post-Copenhagen?
And asking Ed Vaizey (the Conservative shadow Minister for Culture) why anyone involved in the arts would vote Conservative given their views over the funding of The Arts Council?

Where art movements like the Fluxus or art schools were once the bastions of left-wing thinking and direct political engagement, there now seems to be a mood of indifference. The Smiths are in part nostalgic for the past and on the other hand realistic about what an artist’s involvement with politics can achieve. They have created a show that delves into the current apathy surrounding politics of the ‘middle-ground’ and the elaborate channels that politicians have created to ‘try and get things done’. With their familiar language of signs and placards they attack scepticism in favour of a bright new world where campaigning can change the cultural, natural and creative landscape. With this exhibition, Bob and Roberta Smith are attempting to herald in a new era of political activity.

This is not the first time that the Smiths have used the democratic process and popular politics as subject matter, in fact the artists have returned to it many times. Pictured in their book Make Your Own Damn Art, is a small badge made by a youthful Bob Smith. The year was 1979 and Britain was on the brink of the Thatcher era. The text reads, Tories help the Rich, Labour helps the Rest. It was not meant as an artwork but reflected a common art school sentiment of the time. In an installation entitled The Government at Cell Projects, London (2003) Bob and Roberta Smith played with national disappointment as the first cracks in New Labour’s shiny exterior became visible with a selection of bluntly worded signs poking fun at the then Cabinet. In 2004, as part of a public art project, Bob Smith stood for Mayor of Folkestone, Kent, asking people to Vote Bob Smith for more Art. More recently during Altermodern (curated by Nicolas Bourriaud in 2009) at Tate Britain the Smiths presented a series of signs reflecting the optimism of the first black President of America alongside heaps of street debris.

What all of these projects share is a distrust of a fallible political process alongside a deep-seated belief that against all of the odds, things could get better…….(if only by accident!)

Bob and Roberta Smith live and work in London. Their work is currently being shown as part of Niet Normaal at the Beurs van Berlage, Amsterdam and their solo show This Artist is Deeply Dangerous at Beaconsfield, London runs until 21st Feb 2010. Bob and Roberta Smith are also artists in residence at the New Art Gallery Walsall working with the Epstein archive resulting in a major exhibition The Life of the Mind at the museum in 2011. Bob Smith is currently a Trustee of the Tate. The show also includes three new sculptures that have been made in collaboration with Tim Fidall who recently worked with Bob and Roberta Smith on their 2008 Tate Christmas tree.