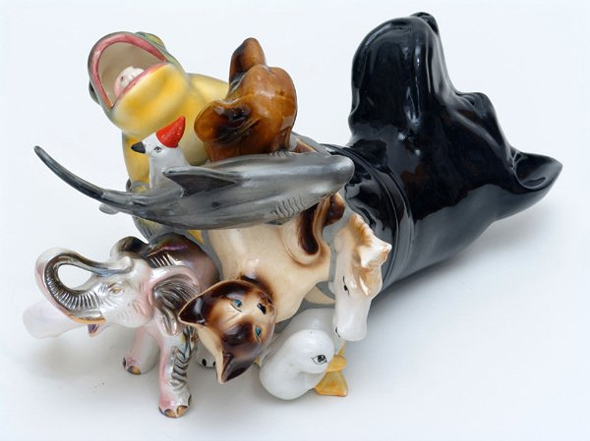 Galeria Fortes Vilaça is pleased to present the exhibition by Rio de Janeiro artist Barrão. This show, Barrão’s first in São Paulo since 1992, features ten new sculptures constructed through a process of gluing together the fragments of porcelain objects.

The artist began to work with appropriations of everyday objects in the 1980s. Since then, he has used household appliances, such as refrigerators, egg beaters and televisions, and more recently has begun to create sculptures with decorative porcelain, always subverting – with humor and irony – the original meaning of the objects.
Barrão groups pieces of the things he appropriates, gluing them together with epoxy resin and leaving the glued seams visible in the finished sculpture. As Luis Camilo Osório has stated, “some of the pieces can suggest new formattings, and the result arises from chance happenings along the way – purposeful and random acts go hand-in-hand.” The artworks are guided by classic sculptural questions, such as the concern for volumetrics. In all the sculptures there is a central cohesive volume from which the extremities extend.
Generally made with old and used commonplace objects, the sculptures are loaded with pop and kitsch references. There is no logical hierarchy among the objects; Barrão’s interest is focused on their forms, colors and sizes, and therefore an elephant, a skull, a Buddha, a teacup, a teapot or a little cat belong to the same classification.
In Delícia Tropical [Tropical Delicacy], a series of teacups, little vases, pots and pieces of decorative items with stamped fruit patterns are balanced to create a colorful and narrow 1.9-meter-high totem pole. At its top are four little ceramic parrots. Ninfas Derramadas [Spilled Nymphs] is made up of small sculptures of Greek goddesses with bare breasts arranged upside down. The delicate goddesses form a kind of white tail for the rest of the work, consisting of an accumulation of fragments of blue jugs and teacups.
Another “unforeseen conjoinment” is seen in Hospedeiros [Hosts], in which a ceramic dog has its head cut off and separated from its body, to which the artist glues a series of other ready-made objects, such as an elephant, a teapot and an umbrella handle.
His works evince a curious spirit that enjoys taking objects apart and then sticking them together in a way that confers a new sort of operation to them. With no regard for the household use or decorative function of these objects, Barrão disorders and destroys them, to then construct his artworks from their fragments.
Galeria Fortes Vilaca