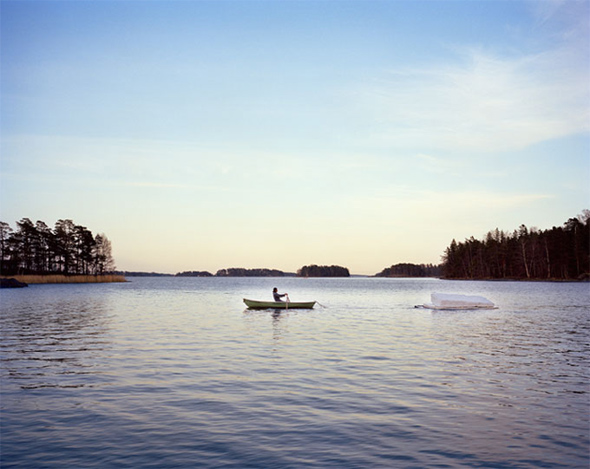 In the texts united under the title of “Atlas” , Jorge Luis Borges immerses the reader into tales of his travels around the world – relating stories of the sites he visited during his travels through his own personalized geographies. Real travel diary, this anthology of texts and photographs sets the writer’s eye on the overlooked details of these places – even bi-passing esthetic concerns as Borges is more interested in «the raison d’être» of these entities and places.

Refered to for centuries as an allegorical and strictly iconographical association with movement, the question of mobility is nowadays expressed in contemporary art through practices integrating notions of travel and motion as a significant process. Evoking a poetry of fate and paradoxes, the concept of mobility – between wandering and progression – marks a deceleration of time revealing the existence of abstract geographies.

Each of Dove Allouche’s works originates from a travel leading the artist to the source of his subject. If photography is often the first step which refers to the idea of the ephemeral or of what has been, other modes of representation in Allouche’s practice such as drawing or engraving come to reactivate a time lost, a slowness specific to the artist’s gesture. The project entitled “Mélanophila I” (2003-08) is a photographic series created during the fires which devastated the south of Portugal in 2003. Presenting transient images of a charred eucalyptus forest, this series is the result of a creative process which went on for several years and during which the artist introduced several techniques and approaches to this project. In the initial step, Allouche swiftly photographed the forest and then reproduced the resulting images as lead drawings – meticulously focusing on the elements which characterized these images as being furtive. These drawings, having already shifted from one state to another, came full circle by being photographed and printed onto charcoal paper, characterized by a texture suggestive of the original matter of the charred trees.

“Le Temps scellé” (2006) is a photographic project composed of a series of coloured cibachromes taken in Estonia on the location of the film “Stalker” by Andrei Tarkovsky. Thirty years after the production of the film, Allouche travelled to Estonia in order to reproduce as accurately as possible the views described by the abstract geography called “the zone” in Tarkovsky’s fiction. This process, described by the artist as a “ritual of verification”, also sustains the mysticism created over the years surrounding this area and where the rules linked to the fiction of the place seem to have taken over reality. Indeed, Tarkovsky had to re-shoot the entire film a few years later due to the disappearance of the original film.

Antti Laitinen’s work stems from performances which are documented through photographs, videos or objects taken from his performances. Joining a search for identity and a poetry of the absurd, the artist pushes his physical limits in a quest for the discovery of the wild Nordic landscape. Led by an undeniable humor and irony, Laitinen’s work immerses us into a world in which heroism meets simplicity through captivating images recalling the relationship between man and nature. In a dialogue omnipresent with the artist’s origins – and as it is a dominating natural element in Finland – wood naturally intervenes in the artist’s creative process. Laitinen therefore offers us this reconstituted forest, made from barks carefully collected and re-organised to create a personal living memory linked to the artist’s childhood and roots.

Closing “The Island Trilogy” which started in 2007, “Growler” is a video issued from a recent performance. The first chapter entitled “It’s My Island” depicts the artist building his own island in the Baltic Sea; Laitinen then went on to imagine an island which would enable him to travel and thus resulting in the second performance “Voyage”. The trilogy was completed in spring 2009 with “Growler”. Having preserved a natural ice block since the winter, Laitinen resurrected this iceberg onto the water on the occasion of the third performance devoted to the trilogy. Whereas in previous performances the idea was to inhabit his new island, this time, Laitinen went on a slow journey during which the small iceberg progressively disappeared.

Developed through filmic montage, Oliver Pietsch’s videos are marked by a solid archival testimony to cinematic and audiovisual culture. From old films to more recent ones, from documentary to independent cinema through Hollywood block-busters, the artist plays around with fictional re-interpretations by a themed selection of chosen images. These images are accompanied by a remixed or alternative soundtrack, linked or not to the original fiction. This filmic “reshaping” immerses the spectator in a narrative of accumulated visuals, whose incomplete nature leaves the door open to personal identification and to emotions linked to the recognition and familiarity of the images.

The video “Because” presents a succession of views and aerial scenes taken from various documents – from « Triumph des Willens », « Superman Returns », « Badlands » and « Flying » to « The Aviator », « Sound Barrier », « Dark Blue World » and « The Right Stuff ». Lasting for three minutes, the film presents sequences of filmed skies – from clouds to sun-sets. Soothed by rhythm and hypnotic images, the spectator is embarked by the Beatles song of the same title remixed by George Martin.