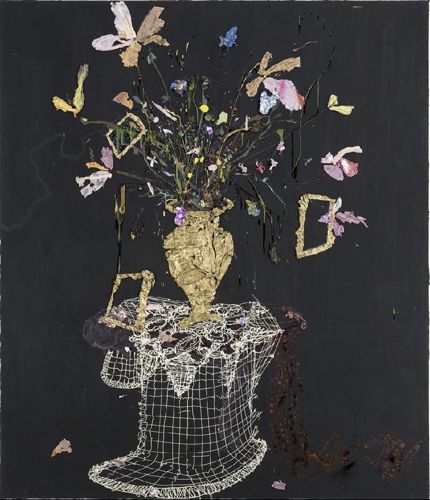 Kavi Gupta is pleased to annouce it’s first solo exhibition of Angel Otero’s work. Angel Otero is quickly becoming well known for his textured canvases that weave between abstraction and representation taking their subject matter from an ongoing personal and often autobiographical narrative from his childhood in Puerto Rico. Memories, particularly those from his grandmother, parallel what he is now embracing in contemporary art.

Otero’s paintings and sculptural assemblages also engage directly with a process-based art making. His works are extremely intuitive and often address the idea of failure and the push/pull of painting an inventive space that also relates directly to his own personal history. Structures attempt to balance the slippage between subject and object. Layers of silicone become fluid doilies floating on table tops and thick shapes of dried oil paint are glued into simple patterns recalled from memory.

The work doesn’t operate as a presentation but rather as a self-generating proposition with which to construct, deconstruct, and reconstruct meaning over and over again. Unusual materials and aesthetic extravagance have been inspiring his recent work. Scale is expanding to comment of monumentality, surrounding the viewer and transforming the work to become physically accessible and present. His explorations of personal symbology  as well as abstract expressionism that brings to mind painters that continue to influence his work such as Philip Guston, Willem de Kooning, Georg Baselitz, and Joan Mitchell.

Angel Otero (b. 1981, Santurce, Puerto Rico) was recently including in the Constellations exhibition at the Museum of Contemporary Art, Chicago. He is the 2009 recipient of the Leonore Annenberg Fellowship Fund in the Performing and Visual Arts. Otero has an upcoming solo show at the Chicago Cultural Center.

One thought on “Angel Otero”