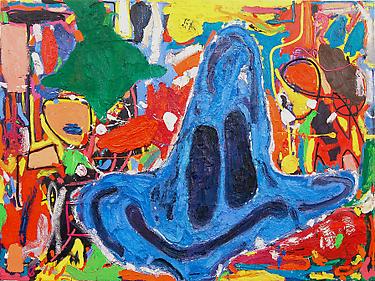 André Butzer’s second New York show at Metro Pictures “Nicht fürchten! Don´t be scared!” features a group of new, closely related works that focus on the “formal event” of painting. By emphasizing shapes and fields of color, these works possess a less linear take on the usual motifs in his work—colorful hybrids of abstraction and cartoon figuration featuring a family of characters inspired by art history, comics, politics and animation. Both sinister and amusing, these elegant compositions balance large, vaguely recognizable biomorphic forms within chaotic, multicolored backgrounds or heavily textured monochromatic fields.

“Blue Smurf” presents the most identifiable image in the exhibition with the cartoon character embedded in a complex field of thick paint—the Smurf’s wry smile acknowledges his victory over abstraction. In the reductive “Entombment of Winnie the Pooh” a Pooh-yellow blob is taken to his grave in the night; a sacrificial pop martyr intended to unite art history. “Favorite Painting of Paul Cezanne” and “Aladdin and the Magic Oil Lamp” balance Butzer’s use of maximal, colorful abstraction and a newfound spatiality to celebrate the Post-Impressionist master and to “have something truly colorful and tender like a big Disney movie”, respectively.

The title of the exhibition is taken from a progression of three paintings by the same name. In the first, a thickly painted flesh colored kite shape (a fish? a piece of meat?) emerges from a web of bright, gestural painting. The second follows the same format with an enormous black spider shape prominently taking over the canvas. Finally, in the third, the black color has power over the whole canvas, over-painting the thick shapes and colors in evidence underneath.

André Butzer was born in 1973 in Stuttgart, Germany and lives and works in Rangsdorf. He has exhibited widely in galleries in Europe, Japan and the United States. A survey show (with catalogue) of his work was held at the Kunsthalle Nürnberg in 2009.