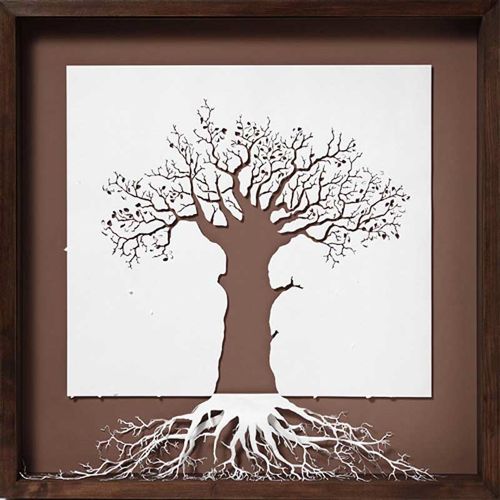 Out of nothing / Ud af Intet

Can a plain A4 sheet of paper animate tragedies and comedies? Peter Callesen′s hands can. With his technical brilliance and his subtle instinct for the fragility and bewitching potential of human life as well as of the material, he carves meaningful stories out of something as ordinary as the white paper from the printer tray.

Peter Callesen is an outstanding figure in Danish contemporary art. In particular, it is his talent for developing both humorous and suggestive stories out of paper that attracts well–deserved attention. With a knife and an unerring command of the composition he transforms the plain A4 sheet into tales and visual play on words rising from the sheet.

In his paper works Peter Callesen demonstrates that the flatness of paper can rise into a living three–dimensional picture. The pictures he creates out of paper are multi–dimensional in the sense that there is both a positive and a negative form, in which the silhouette, the absent picture, is often the most intense expression. Similarly, the unfolding tale is equivocal, stretched between the strivings of hope and the gravity of reality.

Peter: ″I think the transformation from two–dimensionality to three–dimensionality is almost magic. This is not to say that I am a magician. For me the challenge is to create something out of an ordinary flat sheet of paper. I examine how paper is expanded beyond its natural size and beyond its inherent nature. Like the conjurer I do not put all my cards on the table. I prefer something to be hidden or not immediately intelligible.. But symbolically and as far as meaning goes I work with magic and with the impossible.″

For this exhibition Peter Callesen has made some works which reflect on religion in general and specifically on stories and motives from the Bible. In a series of framed papercut, which take their inspiration from old iconic paintings, Callesen reflects on themes such as The Fall of Man, suffering, resurrection and he asks the question whether it is possible to create a meaningfull image of God today?

A new book ″Out of Nothing″ will be launched for the opening, showing both new and old works by Peter Callesen and with two essays by arthistorian Anni Nørskov and Gerd Rathje and an interview with the artist. The book will soon be available through Peter Callesens website.

The Museum of Religious Art