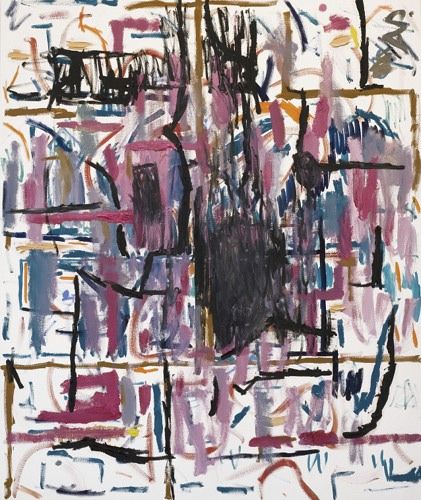 Kavi Gupta Gallery Berlin is proud to present the debut solo exhibition of painter Patrick Alt. Although the gallery’s inaugural exhibition was last September, Alt’s daft exhibition title – “I Open Up The Gallery” – relates to a figurative suggestion rather than the exhibition’s actual vernissage; Alt’s exhibition is one to naively rediscover the space anew, in the same sense that Alt approaches his work as a painter. Included in the exhibition are a suite of the artist’s abstract and bold oil canvasses as well as few painted bought objects installed throughout the gallery. Shot from the hip, Alt perpetually creates works that balance between the artist’s reasoned and developed conceptual disciplines and one’s will to make a new, heartfelt, and expressive work of art. The works’ self-criticality arises from Alt’s radical sense of trepidation, one that questions how an artist is able to break stride with their past and begin again.

Patrick Alt (b. 1976 in Frankfurt am Main) is currently completing his studies at Frankfurt’s Städel Schule under Prof. Michael Krebber. Most recently Alt’s work has been included in a group exhibition (Adrian Buschmann, Henning Straßburger, and Alt) at Galerie Fiebach & Minninger in Köln. Alt has also spent the past year making shows across continental Europe with the artist group Vandel (Philipp Schwalb, Henning Straßburger, Christian Rothmaler, Jannis Marwitz, and Alt). The group has made a series of exhibitions under their collective title, most recently at the AtelierFrankfurt in Frankfurt am Main and at Marks Blond Project in Bern, Switzerland, and also listed in the Watchlist of the July issue of German collector magazine, Monopol. Alt lives in Frankfurt am Main; he maintains a studio there and in Berlin.