Yesterday i was @Kvium`s studio, here are a sneak view !

2 very cool shows are opening next week and there afterparty…

Ken are awesome, his works are funny and stil have some thing.

Robert Rauschenberg, one of the greatest contemporary artists, is exhibiting at Galleri Faurschou. This exhibition is a selection of his latest works, the magnificent collages of pigment transfer on polylaminate entitled Scenarios. Exhibited are works referring back to his lifetime production, including the early silkscreens from the 1960’s, some of which were exhibited at Galleri Faurschou in 2005.Scenarios are Rauschenberg’s images of America. Not the usual imagery from soaps and other US surface culture, these works portray the anti-commercial and the everyday America. In the huge collages we see the raw graffiti painted walls, the deserted street corners with rubbish and fading advertising billboards. Presented to us is the agricultural America, the road systems, the wooden and decaying road signs and the empty bottles on the table in the diner. Visible is also the desolate building sites with gutters and roadwork cones. Also portrayed is New York’s Chinatown with its signs in Chinese, the colourful shop windows with toothpaste, teas and other boxes stocked in neat rows.Presented to us is America post 9/11, where the American flag re-appears, not simply as a symbol but also as a stripy pattern. The powerful visual effect of these scenarios is exactly the aesthetic orchestration of the multiple images of reality, far removing the works from mere documentary. For example Rauschenberg inserts a close-up of a road stripe, a bike reflex, a curtain with a cherry, abstract colour parts or a graphic logo in the overall composition as a counterbalance to the visual theme. The collages are thoroughly composed paintings with repetitions, reflections and displacement of imagery. Present in these works is an incredible visual rhythm due to the tight balance between figure and the white surface keeping the collages firmly fixed and providing the eyes with fields in which to rest. In his 80s, Robert Rauschenberg is in great form. Most striking about Scenarios is the artistic excess and almost cunning flair, still characteristic of Rauschenberg. Rauschenberg’s works have the strength of a whole life dedicated to images and the ease of a master’s creation. References are humorously made to earlier works, for example the rooster on the house end and the running hen known from Rauschenberg’s Combines as with fire hydrants, water tanks and oversize insects. In a sense, in these scenarios all is known and yet so fresh and new. Never before have images of everyday life and the non-polished America been so optimistic. Great warmth radiate from these works, an appreciation for the real, to life as it is lived and displayed with focus on that which is not usually emphasised. A warmth that immediately transmits to the viewer when encountering these magnificent works. 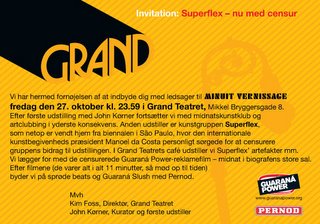