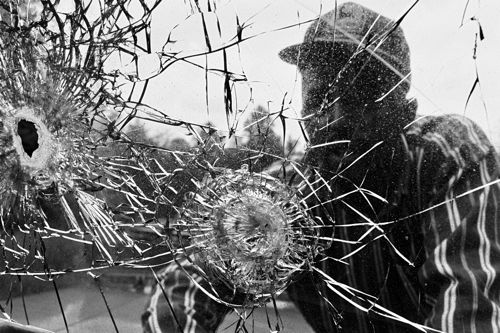 The existence of yet another population of our nation’s landscape has
begun to fade. Institutional racism, foreclosures, and bankruptcy have shattered
American black farmers’ rights to the land they have occupied for generations.
Today, African Americans own only roughly 1 percent of all farmland in the
United States and few have taken notice.

As recognition of this population continues to grow faint, the Jack Hanley
Gallery presents “Where Furrows Run Deep,” a photographic documentary by
Jeffrey Sauger.  Sauger’s collection of images shot on black and white film over
several years bares witness to a disappearance. Neither overly sentimental nor
strictly practical, “Where Furrows Run Deep” speaks with an emotional utility.
The aesthetic achievement of Sauger’s compositions function to further the
testimony and visibility of the vanishing American black farmer; they are a call to action.

Jeffrey Sauger began the project as a graduate student in Ohio in 1999. He
continued the project through grants and sponsorship from Blue Earth Alliance.
Sauger received his master’s degree from Ohio University’s School of Visual
Communication, and is a professional photojournalist whose work has appeared
in The New York Times, The Los Angeles Times, Time, The Detroit News, Detroit
Free Press and The Washington Post. In 2000, Sauger was named Michigan
photographer of the Year by Michigan Press Photographers Association.