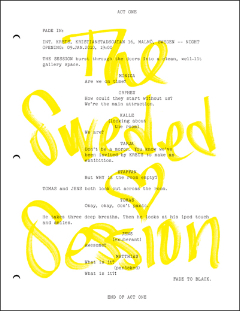 The Session is a group of eight international artists and designers, based in Amsterdam, that makes a thematic, interdisciplinary fanzine since September 2007. The Session does not work with a standard form or a recurrent basic theme, but produces on the basis of a regular process; per session, (usually) one of the eight determines the theme. This person is also responsible for the editing, the design and the production. Per session a number of guests are invited.

For this edition The Session will be working around the theme ‘Sweded’, referring to the Gondry movie ‘Be Kind Rewind’, in which the main characters start recreating films using themselves as actors and cheap special effects, calling it ‘a sweded film’.

The Sweded Session can be an imitation, a copy, a paraphrase, a re-make, a new-make, a re-enactment of something (anything) already existing. It can also deal with the direct association with Sweden since the Session is leaving Amsterdam for Malmö for a week; any direct involvement/interpretation of Sweden itself would consequently become something ‘sweded’. The Sweded Session will be executed during the week at KRETS in Malmo and The Session will invite local artists to participate and contribute with works, resulting in a publication and an exhibition.