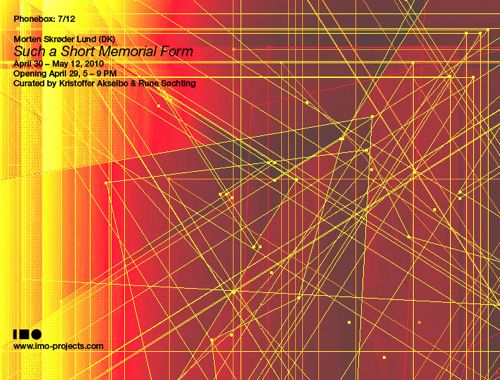 Danish artist Morten Skrøder Lund presents a brand new work titled Such a Short Memorial Form in the exhibition space Phonebox at the artist-run gallery IMO. Phonebox is located in a former phone cabin, which will serve as an intimate exhibition space with room for only one person at a time. Here the public is invited to experience the sound work Such a Short Memorial Form April 30 – May 12.

In his new work Such a Short Memorial Form created for IMO’s Phonebox, Morten Skrøder Lund works with how a space acoustically can be represented and displaced. The work unfolds both auditorily and visually by use of microphones and speakers as primary components. Sound from the gallery space outside the acoustically isolated phone cabin is captured with microphones and is heard displaced and distorted inside the phone cabin. The idea of the cabin as a sound-proof private space and the walls as stable architectural borders are challenged. The spatial displacement is further enhanced by the visual elements of the work where the magnetic field that exists around a loudspeaker is used to create a floating sculptural structure.

Morten Skrøder Lund is a young Danish artist, graduated from the Royal Danish Academy of Art in Copenhagen. He works in various formats such as painting and installation and often integrates sound as an active element in his works. He is active as a musician with special attention to experiments with electronic sound and phenomena such as feedback. His approach to the sonic medium is spatial and sculptural. Especially the idea of sound as a physical event is at the centre of his work where sound as a process literally sets material in motion. And through this motion creates relations between objects, materials and people.

Morten Skrøder Lund’s work is the seventh in a series of sound-based works presented in Phonebox at IMO in the first half of 2010. The series is titled Sounds Up Close #1-12 and is curated by Kristoffer Akselbo and Rune Søchting. It is the intention of the series to present a number of important artists who work with sound as a medium. The different pieces reflect a variety of approaches to the work with sound as medium. Over a period of six months a total of twelve pieces will be presented each for a fortnight. Some of the up-coming artists in Phonebox are Dani Gal (IL), Steve Roden (US) and Marc Behrens (DE).