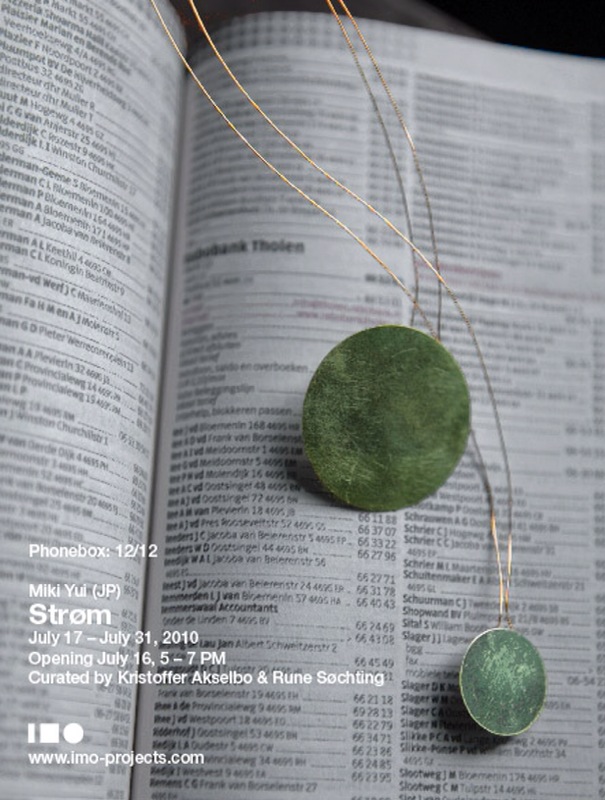 July 16 Japanese artist Miki Yui presents her brand new work Strøm made for the exhibition space Phonebox at the artist-run gallery IMO. Phonebox is located in a phone cabin, which now serves as an intimate exhibition space with room for only one person at a time.
In Miki Yui’s work Strøm Phonebox becomes a unique place that is auditively connected to remote locations. The Danish word Strøm used in the title refers to the electrical nature of the telephone technology as well as an idea of sound as something streaming. The audience steps into a stream of sounds that likewise seem to flow into the phonebox. This happens due to speakers installed in the phonebox and special piezzo speaker-elements mounted on the pages of an old phonebook. The pages are set in motion so as to function as sound-emitting membranes.
Miki Yui is a Japanese artist based in Düsseldorf. In her work she investigates what she calls “small sounds”. Small sounds are sounds that result from minimal movements in the periphery of our auditory experience. Miki Yui’s work – whether it be large scale installations or audio-works on CD – combines the fragile and fluctuating with the concrete and tactile. She has recently developed the “acoustic survival kit 01” with artist Felix Hahn, which is a media body suit with built-in piezzo-speakers that generate sound. Whereas other media-suits used in virtual reality isolates the user from his or her surroundings, the survival kit connects its user through small speakers to his or her immediate environment. In this way her work calls attention to otherwise imperceptible “small” sounds and movements so as to connect the body to the world.
Miki Yui’s work is the last in a series of 12 sound-based works presented in Phonebox at IMO in the first half of 2010. The series is titled Sounds Up Close #1-12 and is curated by Kristoffer Akselbo and Rune Søchting. It is the intention of the series to present a number of important artists who work with sound as medium. The series reflects a number of different approaches to sound. Over a period of six months a total of twelve pieces have been presented each for a fortnight. Earlier artists presented in Phonebox are Stephen Vitiello (US), Ursula Nistrup (DK), Ultra-red (US), Jio Shimizu (JP), Camille Norment (US/N), Morten Skrøder Lund (DK), Aeron Bergman and Alejandra Salinas (US/ES), Marc Behrens (DE), Dani Gal (IL), Steve Roden (US) and Don Ritter (CA).
Phonebox has earlier served as a phone cabin for the employees at Carlsberg. During the last six months the space, which is acoustically isolated, has been functioning as a unique frame for display and reception of sound-based works. Moreover, the space itself has played an important role in the conceptions of many of the presented works.