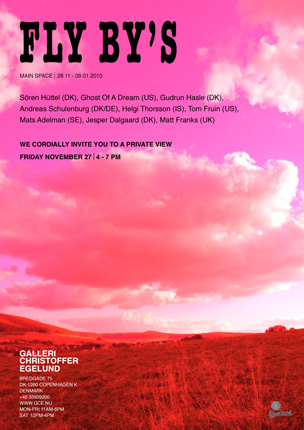 Galleri Christoffer Egelund is proud to present the group exhibition Fly By’s. The exhibition was curated in cooperation with Anders Brinch and Morten Steen Hebsgaard and presents an international line-up of nine progressive artists, who all individually reflect the contemporary art scene of today. Consequently, visitors can see new works by: Sören Hüttel (DK), Ghost of a Dream (US), Gudrun Hasle (DK), Andreas Schulenburg (DE/DK), Helgi Thorsson (IS), Tom Fruin (US), Mats Adelman (SE), Jesper Dalgaard (DK) and Matt Franks (UK). Each of these nine artists incorporate their own unique style into sculptural, light or wall works. They come together from different parts of the world and converge in the same space, ready for a Fly By at Galleri Christoffer Egelund, where they will have room for everything from quiet passages to wilder excesses.

Sören Hüttel (DK) graduated from Funen Art Academy and Glasgow School of Art. He has exhibited in, amongst other places, Latvia, China, Scotland, the US and most recently at Gentofte Library’s Trane exhibition with ”Disco Volante”. Ghost of a Dream consists of the artist couple Adam Eckstrom and Lauren Was (MFA Painting with Honors and MFA Sculpture with Honors, respectively, from Rhode Island School of Design). They have recently participated in the Young Masters exhibition in London, VOLTA 5 Artist Project in Basel, and Talent Preview ’09 at White Box Gallery in New York. Gudrun Hasle (DK), who graduated from Funen Art Academy and the Royal Danish Academy of Art, has presented solo exhibitions at, for instance, Funen Art Museum and, in the US, West Chicago City Museum. Andreas Schulenburg (DK/DE), who graduated from the Royal Danish Academy of Art, has exhibited at, for instance, ARKEN Museum of Modern Art and Malmö Kunsthal and is represented at ARoS Art Museum, the New Carlsberg Foundation and the US Penny McCall Foundation and others. Helgi Thorsson (IS) is an MA in Fine Art from the Sandberg Institute in Amsterdam with solo exhibitions at, for instance, Fries Museum (Holland), and most recently he participated in ’Momentum Festival – 5th Nordic Biennial of Contemporary Art’ in Norway. Tom Fruin (US), who graduated from the University of California, Santa Barbara, has exhibited at such museums as Haifa Museum (Israel), Museum of Contemporary Art (Denver, Colorado), Austin Museum of Art (Austin, Texas), and Museum fur Angewandte Kunst, Frankfurt. Moreover, he is represented in several collections. Mats Adelman (SE), who graduated from Malmö Art Academy, is represented in the permanent collections of Malmö Art Museum and Lund Art Museum, amongst others. Jesper Dalgaard (DK), who graduated from the Royal Danish Academy of Art, has exhibited at Aarhus Art Museum, Skive Art Museum and the National Gallery of Denmark, amongst others, and has received the biennial scholarship of Statens Kunstfond (Denmark’s national art foundation). Matt Franks (UK) has an MA in Fine Art from Goldsmith College of Art in London. He has exhibited at, for instance, Birmingham Museum of Modern Art, Tate Britain in London and the Aldrich Museum of Contemporary Art, Connecticut, USA, and received the British Council’s Individual Artists Award in 2001.