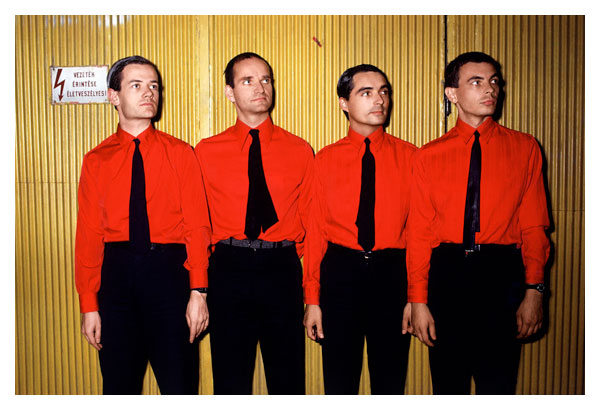 The seventies and early eighties were the golden ages of Rock and Pop. It was
during this time the internationally regarded Swiss photo artist Hannes Schmid
closely accompanied over 250 rockbands and individual stars with his camera in
a spirit of friendship. Schmid photographically traced the life of the
musicians all the way to their iconization as rock stars, with his work
ranging from pictures of intimate moments in the domestic sphere, to capturing
the artists on tour and on shared vacations, and sole portraits of the
musicians. After 30 years Hannes Schmid has finally opened his archives and
with the exhibition at Galerie Nicola von Senger as well as an exceptional
publication is making a selection of his images accessible to the public for
the first time.
The works of Schmid awaken a comprehensive visual process, which frame a
discourse between preproduction. In hiis photographs of rock musicians, associations of deep bonds
with the key characters are evoked and claims to private memories are raised,
mirroring human inconsistency. His images reveal a particular empathy and
closeness to the individual, and his frontal portraits became his trademark.
Just flipping through the collection, ambivalent appearances of the
protagonists become distinguishable. Genesis guitarist Mike Rutherford as a
father and nature lover at his country house, and then again as an English
dandy with a plaid coat and a color-coordinated shawl. Barkley James Harvest
singer John Lees down on the farm and striking a very similar pose as a band
member in his stage costume. Les Holroyd on tour wearing makeup, then as a
horse whisperer and finally, alone, in his swimming trunks on the beach at
Malta. The embedded photography and natural perspective of the musicians’ life
is instrumental to reveal the stars in the context of everyday living.
With his unpretentious use of the camera, Hannes Schmid leaves it to the
musicians to present themselves. Thus, by their unique actions, the musicians
enhance the essence of their own persona. By a virtually deviant and
hyperbolized ostentation they stake so to say a claim for distinctiveness.
Pictures such as the dining table laid in a bourgeois way on the night of a
Foreigner concert, or Suzie Quatro depicted as the girl next door speak of a
world that can’t be so very different from ours. Conversely, the family
picture around the fireplace of bassist Trevor Bolder of Uriah Heep appears
absurd. In this case, Hannes Schmid achieved to capture the changeability of
the protagonist with his camera and so created an eerie closeness to this
seemingly normal family. It becomes quite clear that his photos display
exactly what has been seen. Schmid reveals the authenticity of the scene.
The exhibition Hannes Schmid – Rockstars is on display from October 26 to
December 24, 2009. His book, eponymously titled, is published by Edition
Patrick Frey, Zürich (ISBN 978-3-905509-84-7) and is a must for both fans of
vintage rock `n roll and pop, as well as for connoisseurs of clever and
straightforward photography.