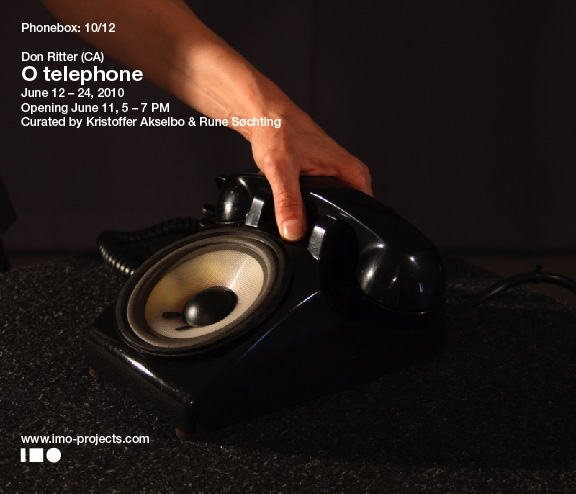 Canadian artist Don Ritter presents his work O telephone in the exhibition space Phonebox at the artist-run gallery IMO. Phonebox is located in a phone cabin, which now serves as an intimate exhibition space with room for only one person at a time. Here the public is invited to experience the sound work O telephone June 12 – June 24.
The sound composition O telephone is based on an interactive installation Ritter created in 2007. In the piece a number of modified telephones from the 60’s were connected in series and placed in a circle. When the audience lifted the handset the telephone generated a loud Om sound. The sound from the different telephones created a sound composition. Om is a sacred syllable within various Indian religions, including Hinduism, Jainism, and Buddhism. The various meanings of Om include the sound of existence, the sound of the universe, and the sound that contains all other sounds. In the sound work O telephone presented in Phonebox Ritter works with recordings of the Om sounds that serve as material for a composition.

A road with heavy traffic as an interactive sound-scene with build-in accidents, a speaker’s podium in front of a loud virtual crowd, a TV that reacts to the viewer. In his work, Canadian artist and writer Don Ritter investigates mass communication and technology through staging interactive scenarios where the audience is at the centre of things. Sound and image are central components that are used to great effect in works that investigate social themes such as hegemony, servility, mechanisms of authority and commodification of human tragedy. Ritter’s background is diverse. He has degrees in Fine Arts and Psychology and Electronics Engineering Technology and a Master in Visual Studies. He has worked as a designer/researcher for Northern Telecom and Bell-Northern Research.
Don Ritter’s work is the tenth in a series of 12 sound-based works presented in Phonebox at IMO in the first half of 2010. The series is titled Sounds Up Close #1-12 and is curated by Kristoffer Akselbo and Rune Søchting. It is the intention of the series to present a number of important artists who work with sound as medium. The series reflects a variety of different approaches to sound. Over a period of six months a total of twelve pieces will be presented each for a fortnight. Up-coming artists in Phonebox are Steve Roden (US) and Miki Yui (JP).