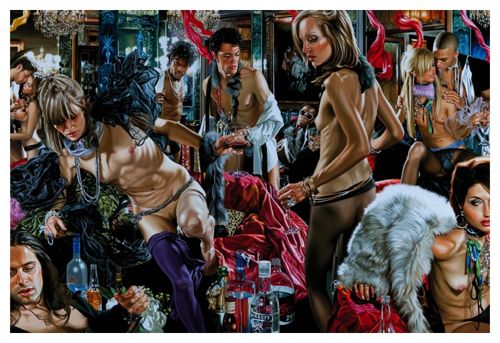 Nicola von Senger Gallery proudly presents Terry Rodgers’ 3rd solo exhibition
in Zürich, Spellbound. Rodgers (born 1947, Newark, NJ, USA) is an American
artist known for his large-scale hyper-realistic figurative paintings. He
creates scenes and a view of the world, using the words of Jean Baudrillard,
that are a “simulation of something which never really existed.”

Half-clothed, with mostly jewellery, fur and underclothing, the protagonists
of Terry Rodgers’ paintings exist in a setting of luxury. With wine and
champagne in their hands, their flawless bodies fit perfectly in the polished
environment of fine fabrics, flower bouquets and lustrous chandeliers.
Rodgers’ works never fails to elicit polarized opinion. Response ranges from
seeing it as “mere kitsch” to praising Rodgers as one of the most remarkable
exponents of today’s figurative painting. As art critic Catherine Somzé says
“Rodgers takes up clichés and flips them on their heads. What could initially
be mistaken for advertising material, on closer inspection quickly seems to be
an indictment of the so-called ‘good life’.” Looking at those meticulously
painted canvases of excessive parties, makes one veer between envy and
admiration, repulsion and excitement, and between a recognition of them as
false realities and succumbing to them as convincing illusions. In this regard
Terry Rodgers’ works are also about the viewer. Spellbindingly it draws the
viewer into participating and reveals “how we interpret and react to what we
see, and how our own lenses determine our perceptions.” (TR)
The opulent paintings, clearly related to the Old Master’s technique of the
baroque era, can be read as a kaleidoscope of Western culture’s dream-world:
The young jet-set generation celebrating the ABC’s of Living (2010),
stereotyped beauties, clones of the rich and famous, all seduced by the lure
of hedonism, promiscuity and luxury — a prescription conveyed by the media,
and incorporated by society, of what we should do and how we should interpret
the world to achieve happiness. Although The Coronation of Concupiscence
(2010) seems to visualize the wildest dreams of a large part of mankind, the
climax is over or it has never occurred. The protagonists, tired from
searching for satisfaction, are captured in a cold and anonymous atmosphere, a
whiff of vanitas in the air. Their faces, with eyes averted from each other,
speak of loneliness, of an existential void, of longing and hope.

As our vision of freedom is heavily fictional, so is the imagery of Rodgers’works. They are a construction by the artist, exemplified most obviously by
his latest body of works, a series of photo-constructions made up of many
different layers of photographs, abstract patterns and shapes, drawings and
signs. The models depicted mirror the contemporary norms of social acceptance
—  young, thin, heterosexual. But Rodgers succeeds in deconstructing and
unmasking the underlying mechanics of our perception of the world. Through the
technique of the photo-constructions, he emphasizes how fragile and imperfect
the image is, creating exuberant and surrealistic compositions.